As we all know, politicians and pundits are screaming about ISIS and Ebola, saying that the US has a sacred obligation to do “whatever it takes” to save American lives. That includes committing ground forces to yet another war, building a triple fence around all our borders, surveillance everywhere, travel bans, you name it. All options are on the table no matter the cost.

But the real truth is that neither ISIS nor Ebola are actually a major threat to Americans.

The hypocrisy is that while the total American death toll from ISIS and Ebola combined is less than ten, we refuse to spend any money to solve problems that really are killing us. For example, expanding Medicaid would save around 10,000 lives a year, and yet the same politicians and pundits oppose that because it would cost too much money. They also oppose any laws that promote gun safety, even though 32,000 Americans die from guns annually. Heck, every year 600,000 Americans die from heart disease and yet they oppose programs to fight obesity.

For some reason, in this country we’re only afraid of bad things entering our country, crossing our sacred borders, when our shelves are already so stocked with bad shit. It’s like people are saying “When I die I wanna know my preventable death has a label on it that says ‘Made in America’.”

UPDATE: Speaking about epidemics of deadly diseases, how about the outbreaks of Measles and other diseases, caused by idiots who refuse to vaccinate their children because of philosophical, religious, or personal beliefs: 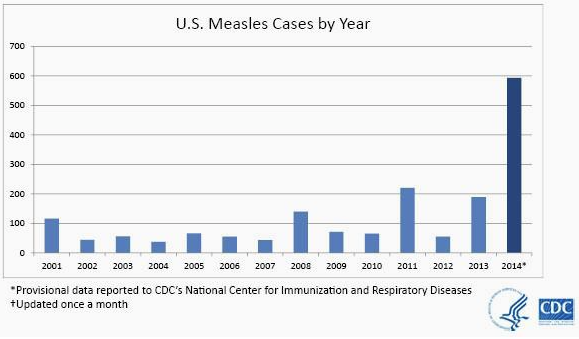 This was written by Iron Knee. Posted on Sunday, October 5, 2014, at 12:30 am. Filed under Hypocrisy. Tagged Health, War. Bookmark the permalink. Follow comments here with the RSS feed. Both comments and trackbacks are currently closed.