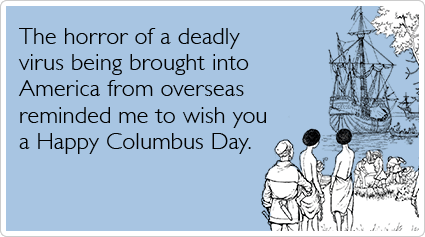 “Old World” diseases had a devastating effect on the native inhabitants of the new world. There were no accurate counts at the time, but it is estimated that between 80 and 95% of native americans died from Smallpox alone. In absolute terms, this was more deaths than caused by all wars and even the Black Death. In some areas, such as the island of Cuba, the entire indigenous population died out.

This was written by Iron Knee. Posted on Monday, October 13, 2014, at 11:37 pm. Filed under Irony. Tagged Health. Bookmark the permalink. Follow comments here with the RSS feed. Both comments and trackbacks are currently closed.