There is an interesting phenomenon in psychology called projection. According to Wikipedia:

Psychological projection is a theory in psychology in which humans defend themselves against unpleasant impulses by denying their existence in themselves, while attributing them to others. For example, a person who is rude may constantly accuse other people of being rude.

According to some research, the projection of one’s negative qualities onto others is a common process in everyday life.

This explains why Dick Cheney won’t shut up about Obama. Appearing on conservative talk radio on Tuesday, Cheney said:

I vacillate between the various theories I’ve heard, but you know, if you had somebody as president who wanted to take America down, who wanted to fundamentally weaken our position in the world and reduce our capacity to influence events, turn our back on our allies and encourage our adversaries, it would look exactly like what Barack Obama’s doing. I think his actions are constituted in my mind those of the worst president we’ve ever had.

Cheney’s statements are not really about Obama, they are about his own demons. After all, who ignored urgent warnings about 9/11, flaunted international law and our allies to unilaterally start two wars using lies, which helped our adversaries recruit even more terrorists in the Middle East? Not to mention almost destroying our economy and running up huge deficits, weakening us even more.

Ironically, Thursday was the 12th anniversary of what some people call the “greatest memo of all time“. The memo was sent by Bush and Cheney’s Secretary of Defense Donald Rumsfeld, basically saying that all of the Bush administration’s foreign policy initiatives were failing and asking the Undersecretary of Defense to come up with solutions: 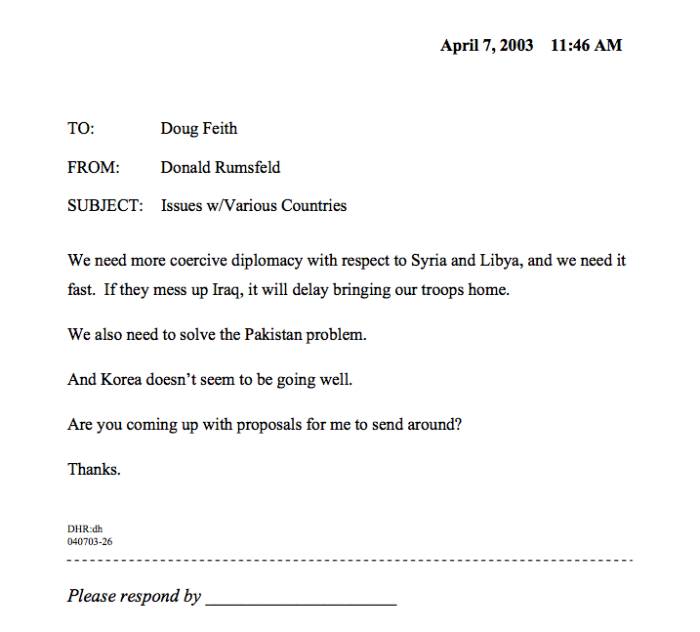 This was written by Iron Knee. Posted on Friday, April 10, 2015, at 12:30 am. Filed under Hypocrisy. Tagged War. Bookmark the permalink. Follow comments here with the RSS feed. Both comments and trackbacks are currently closed.