Donald Trump announces that he is running for president, and Twitter goes wild! If you need more snark in your life, go read about it.

A couple of examples:

Wow. The music tried to get Trump off the stage at his own rally.

Even the Democratic National Committee couldn’t resist a bit of sarcasm:

Today, Donald Trump became the second major Republican candidate to announce for president in two days. He adds some much-needed seriousness that has previously been lacking from the G.O.P. field, and we look forward hearing more about his ideas for the nation. 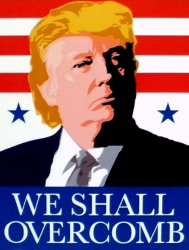 This was written by Iron Knee. Posted on Tuesday, June 16, 2015, at 10:38 am. Filed under Irony. Tagged Elections. Bookmark the permalink. Follow comments here with the RSS feed. Both comments and trackbacks are currently closed.