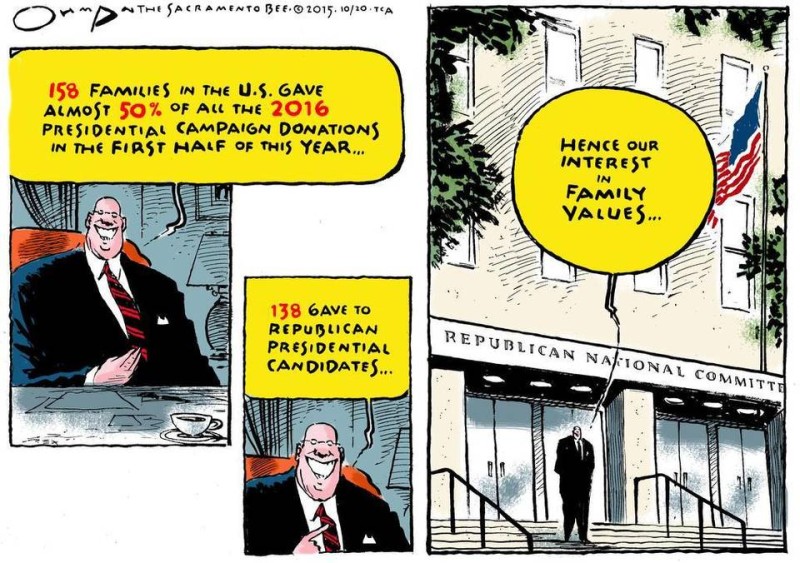 I like this comic because when Republicans talk about “family values” they are mainly speaking about gays, abortion, and single mothers. But while they talk a good story about those things, they haven’t actually gotten much done. So what are the “family” issues where they put all their energies and gotten the most results? Things like inheritance taxes so rich people can pass gobs of money on to their children, and campaign donations from uber-rich families.

While it is true that candidates in both parties take advantage of large donors, it is clear that the Republicans are the big winners in the Super Pac cash sweepstakes. Democrats would reverse Citizens United and other things that have opened the floodgates for legalized political bribery, but the Republicans won’t let them.

UPDATE: Right on cue, Republicans in Wisconsin are in the process of passing three laws that eliminate many state campaign finance laws, dissolve the state ethics and elections board, and eliminate the key tool that prosecutors use to investigate political crimes. Governor Scott Walker, back from his short-lived run for president, has said he will sign the bills.

Republicans are eliminating laws that were used to help convict six members of Walker’s staff of embezzlement and other charges. They are also increasing the amount of money that can be donated to political candidates, and removing restrictions that prohibit Super PACs that anonymously collect unlimited funds from coordinating with candidates. Yup, that means that politicians will be able to control and spend unlimited amounts of anonymous cash in Wisconsin. The bills were the result of lobbying from the Koch-brothers-funded Americans for Prosperity.

This was written by Iron Knee. Posted on Thursday, October 22, 2015, at 8:32 am. Filed under Irony. Tagged Campaign Finance. Bookmark the permalink. Follow comments here with the RSS feed. Both comments and trackbacks are currently closed.