The GOP is still trying to repeal Obamacare. If that isn’t strange enough, arch-conservative Senators Ted Cruz, Marco Rubio, and Mike Lee are going to vote against this repeal, saying that it doesn’t go far enough. Ignoring the fact that as usual this is a symbolic gesture (Obama would surely veto any repeal), it just keeps getting weirder and weirder.

Which brings us to the most recent GOP debate. First, reality-challenged Carly Fiorina declared “Obamacare isn’t helping anyone.” What about the 17 million people who have gained health insurance?

Then Marco Rubio doubled down with a more specific claim, “We have a crazy health care law that discourages companies from hiring people.” If companies are being discouraged from hiring, you would think that after the ACA was signed into law that employment would suffer. Well, here’s the reality: 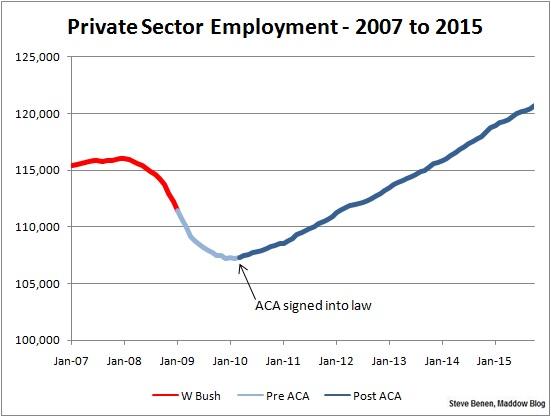 The private sector has not lost jobs since Obamacare was created. In fact, the economy has gained jobs for 60 straight months, which (according to Forbes) is a new record.

You may recall that ACA implemented its changes in stages over several years. The first full year when it was implemented was 2014; that year had the best increase in jobs since Clinton was president (and better than every year of Dubya’s presidency). That’s including all private sector jobs. If we look at just the health care sector, things look even better:

The healthcare industry’s employment spree has continued into autumn with an increase of 44,900 jobs in October.

The Republicans have been trying to repeal Obamacare for 6 years, but they still haven’t said what they would replace it with. The new GOP is just as much the party of no as the old one.

This was written by Iron Knee. Posted on Saturday, November 14, 2015, at 12:30 am. Filed under Hypocrisy. Tagged Employment, Health, Jobs. Bookmark the permalink. Follow comments here with the RSS feed. Both comments and trackbacks are currently closed.