A woman in Massachusetts won the right to wear a colander on her head in her driver’s license photo: 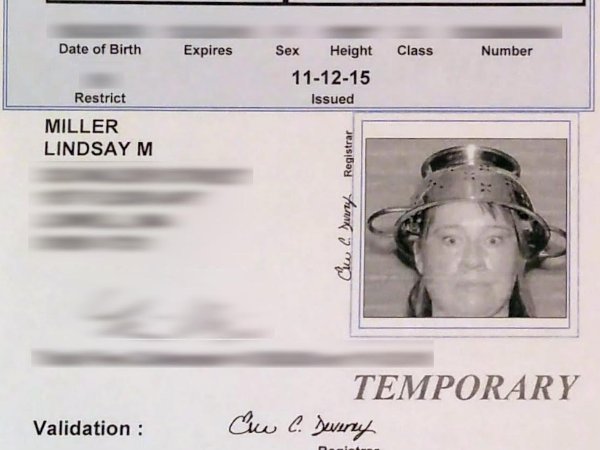 Lindsay Miller is a member of the Church of the Flying Spaghetti Monster. Also known as Pastafarians, members are encouraged to wear a colander in official identification photos as a public expression of their belief.

I think this is actually a very serious issue. Religious extremism is a very real problem in this world. People like Kim Davis think that the constitution gives them the right to violate other people’s rights (and the law) because of their “sincerely held beliefs”. But this puts the state in the position of deciding what is a religious belief (and thus what is a religion) and what is not (even though the First Amendment “prohibits the making of any law respecting an establishment of religion”).

People react in horror at what ISIL is doing in the name of religion, but Christianity had their “crusades“. Shouldn’t Christians practice what they preach: that only people without sin should cast stones?

Where do we get the moral authority to condemn ISIL? Note that I am not defending ISIL – we definitely need authority to condemn ISIL and their atrocities. But that authority can not come from a religious disagreement between Christianity and Islam. If judging a belief as “sincerely held” is the only requirement for violating the law, is there anyone who thinks that ISIL’s beliefs are not sincerely held? They are clearly willing to die for their beliefs.

No, our moral authority can only come from our being a nation of laws that follows the rule of law. I believe (sincerely!) that the Constitution intends that government keep out of the religion business. That means that everybody has to follow the law, regardless of their religion.

Otherwise, I sincerely believe that I should be allowed to deduct 18% of my federal taxes because funding war is against my religion.

This was written by Iron Knee. Posted on Sunday, November 15, 2015, at 12:31 am. Filed under Irony. Tagged Religion, War. Bookmark the permalink. Follow comments here with the RSS feed. Both comments and trackbacks are currently closed.