The Hillary Clinton campaign wasted no time after Donald Trump became the presumptive nominee of the Republican party. She released an online campaign ad that is made up of video of other Republicans sharing their opinions of Trump.

Republican politicians are in a tight spot, especially ones who are up for reelection this year. Nearly all of them have publicly made disparaging remarks about Trump, and Clinton is going to make sure that nobody forgets what they said. If they pivot, they will be chastised at the polls for being two-faced political opportunists. But if they remain negative about Trump, they will be helping a fellow Republican lose.

The Washington Post has published an interesting article “Anti-Trump Republicans confront a dilemma: Are they ready to help elect Clinton?”. As the Party of No, the Republicans have often benefited from having someone they hate in the White House, and Clinton fits the bill. With Clinton as president, they would be on familiar terrain. The GOP would just keep doing what they have been doing during the Obama presidency, which (unfortunately) has worked for them. Dubya was bad enough for the Republican party, they can only imagine the hurt they will go through if Trump is president and uses the power of the White House to remake the Republican party.

A former aide to presidential candidate John McCain tweeted “The GOP is going to nominate for President a guy who reads the National Enquirer and thinks it’s on the level. I’m with her.”

Conservative blogger Erick Erickson of Red State said the likely option is to let Trump run and lose on his own. Of course, that strategy didn’t work all that well in the primary. But what’s the alternative? Erickson admits “There are a number of us who can’t bring ourselves to vote for him, and there’s more and more polling showing just how badly he would cause the Republicans to lose other races.” So many Republicans will spend their efforts (and their money) on down-ballot races, to limit the GOP losses.

Another alternative would be to launch a third-party candidate, but this option has two big problems. First, who would be the candidate? How are they going to find someone who wants to permanently end their political career? And second, that candidate would likely take votes away from Trump, and so would help Clinton even more.

And the future doesn’t look none too bright either. Even if Cruz didn’t win the nomination, he gained stature and power in the Republican party. He caused enough problems for the Republicans as a freshman senator, so they can imagine the havoc he will inflict going forward. And it seems like the only reason Ted Cruz dropped out was so he could run for president in four years.

UPDATE: Trump wasted no time to piss off the Republican Party. During a campaign rally speech in West Virginia last night, Trump told a crowd of 13,000 to not bother voting in Tuesday’s Republican primary:

The problem is that there are a number of contested local races on Tuesday’s ballot, and those candidates were depending on a large turnout. Trump needs to make peace with the Republican Party if he is going to win the general election, but he sure didn’t help his case by telling Republican voters not to vote. But then, it always was just all about Trump. 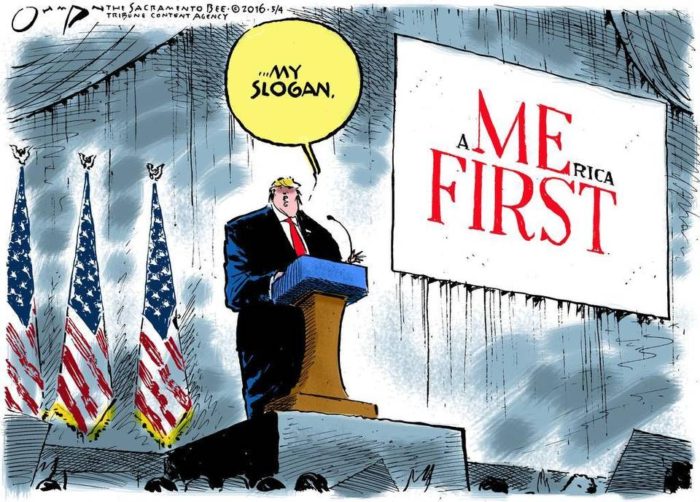 If you liked this, you might also like these related posts:
This was written by Iron Knee. Posted on Friday, May 6, 2016, at 12:33 am. Filed under Irony. Tagged Clinton, Republicans, Trump. Bookmark the permalink. Follow comments here with the RSS feed. Both comments and trackbacks are currently closed.