The Right to Party!

But plagiarism isn’t the only scandal around the potential first lady. According to CBS news, Melania Trump’s bio on the RNC website lies when it says that she graduated from college. As does her website. And Snopes looked into it, and couldn’t find any evidence that she had ever received any degree.

But wait, there’s more! The Trump campaign finally came up with someone to blame for the plagiarism. It only took them three days, which is suspicious enough. They claim that Melania Trump enlisted help writing her speech from a Trump employee who is not connected with the campaign. According to their story, Melania read that person some passages over the phone that she liked, including lines from Michelle Obama’s 2008 speech at the DNC, but that she only meant them as examples. Of course, when Melania saw those quotes in the final speech, didn’t she even notice?

But the bigger problem is that if this story is true, then it reveals criminal activity. It is a federal crime for corporations to contribute cash, products, or services to political campaigns, but the Trump campaign seems completely unconcerned about the law. So why am I not surprised? 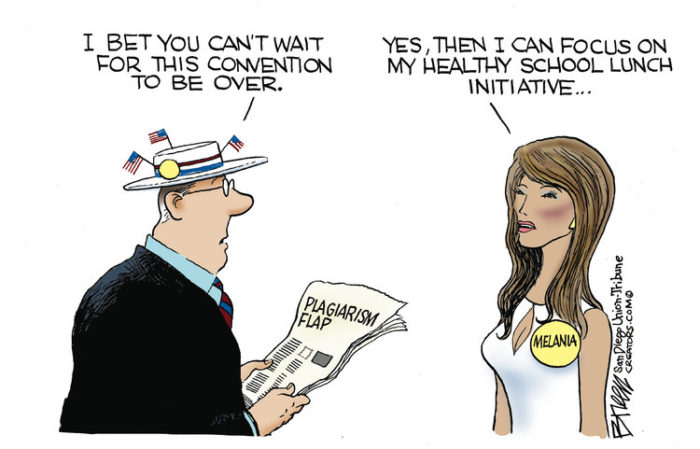 This was written by Iron Knee. Posted on Friday, July 22, 2016, at 12:22 am. Filed under Irony. Tagged Lies, Trump. Bookmark the permalink. Follow comments here with the RSS feed. Both comments and trackbacks are currently closed.