People, including comedians, have made jokes about the seeming bromance between Donald Trump and Vladimir Putin. While it is scary enough that equal-opportunity-attacker Trump has nothing but good things to say about autocrat Putin, Marshall’s article points out that there is plenty of evidence that we should be even more worried. Mind you, we don’t have any direct, solid evidence that Trump is a “Manchurian Candidate” whose strings (at least his purse strings) are pulled by Putin, but there is plenty of evidence that something underhanded and potentially disastrous is going on.

In particular, there is far more evidence that Putin is trying to manipulate a US election than there ever was that Obama was not born in the US and is some kind of foreign agent, something that Trump himself promoted strongly.

Substantiating evidence can be found all over the place. First of all, there is a large amount of Russian money flowing into Trump’s coffers. According to an article in the Washington Post, “Since the 1980s, Trump and his family members have made numerous trips to Moscow in search of business opportunities, and they have relied on Russian investors to buy their properties around the world.” Indeed, in 2008, Trump’s son Donald Jr. told a real estate conference “Russians make up a pretty disproportionate cross-section of a lot of our assets.” And “We see a lot of money pouring in from Russia.”

The article goes on to give examples where Trump has taken money from foreigners with close ties to the Russian criminal underworld. Or where Trump projects “received unexplained infusions of cash from accounts in Kazakhstan and Russia.”

Bottom line is that since his bankruptcy a decade ago, Trump has had trouble finding investment money. All major US banks have blackballed him, with the exception of Deutschebank (which is of course a foreign bank, albeit one with a big US presence). Increasingly, Trump has gotten investment from people with close ties to Vladimir Putin.

Then there is the fact that before he became Trump’s campaign manager and top advisor, Paul Manafort’s job was working for Viktor Yanukovych, the former Prime Minister and then President of the Ukraine, who is a close ally of Putin (until his subjects deposed him). Coincidence?

Other Trump advisors have extremely close ties to governmental entities in Russia.

Looking from the other side, Putin has aligned all Russian state controlled media with Trump. Putin is known to support and fund right-wing nationalist politicians across Europe, whether to try to win influence in those countries or just to stir up instability in their governments. Why not the same thing in the US? Indeed, there is evidence that Russians were involved in the release of the DNC emails this last weekend, which is stirring up Sanders supporters against Clinton.

Putin has never been shy about expressing his hatred of Hillary Clinton. He has publicly blamed her for the 2011 protests in Russia against him. The protestors were accusing Putin of rigging his reelection.

But the thing that made people really suspicious was that Donald Trump’s entire campaign didn’t seem to care about the Republican Party Platform; they completely ignored it, except for one thing. Trump’s team insisted on, “changing the party platform on assistance to Ukraine against Russian military operations in eastern Ukraine.” Before that, the Republican platform called for heavily arming Ukraine against the Russians. That’s right, even if Trump loses, he’s already done a big favor for the Russians.

And then there was Trump’s statement that maybe the US (and thus NATO) should not come to the defense of NATO member states in case of a Russian invasion, which was too much even for many of his strongest Republican supporters.

Let’s put this in perspective. One of the major complaints against Hillary Clinton is that she accepted money from Wall Street for some speeches she gave, and so is too much in bed with them. But Trump has accepted far more money from the Russians, and isn’t even waiting for the election to start giving them quid pro quo.

Lastly, could this be why Trump refuses to release his tax returns? Would it show him hugely in debt to Russians? In the last year alone, we do know that Trump’s debt has grown from $350 million to $630 million.

This isn’t a single article. The Atlantic has noticed this as well. And we also heard from Paul Krugman, and he agrees that there is something going on. Republican Erick Erickson believes that Russians are working to influence our election. And of course the Clinton campaign is starting to pick this up.

At the very least, Trump has a YUUUGE conflict of interest. At worst, the unthinkable is happening — a foreign country is covertly sabotaging a US election for their own gain, and Trump is the traitorous agent. The only question may be whether Trump is doing this willingly, is being pressured to do it against his will, or is simply too stupid to know that he is being manipulated.

Shouldn’t Congress put as much effort into investigating this as they did on, say, Benghazi (including Clinton’s email server)? 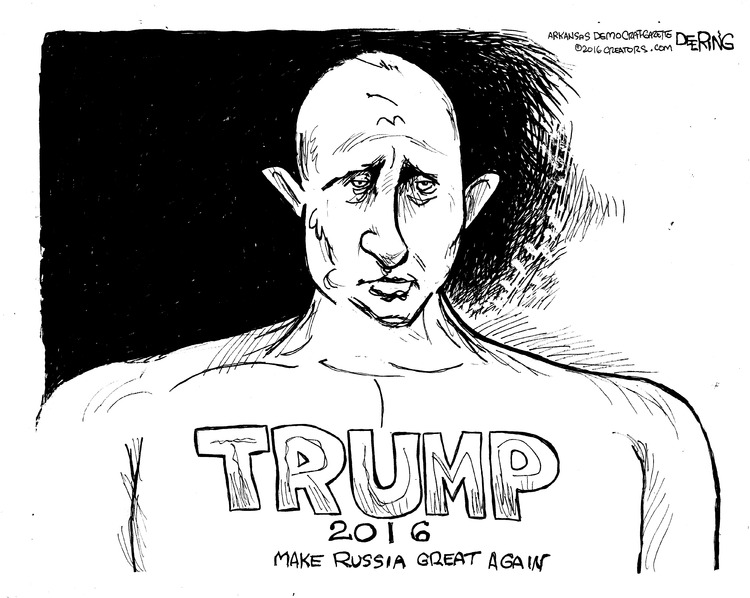 This was written by Iron Knee. Posted on Monday, July 25, 2016, at 12:30 am. Filed under Irony. Tagged Russia, Trump. Bookmark the permalink. Follow comments here with the RSS feed. Both comments and trackbacks are currently closed.