Many pundits talk about the profound influence of demographics on US elections, but what about the demographics of the national conventions of the political parties. Other than an observation of the dance skills of RNC attendees, what do we know about the relative makeup of the conventions?

Without further ado, here is Scott Bateman’s ironic comparison of the demographics of the two major conventions: 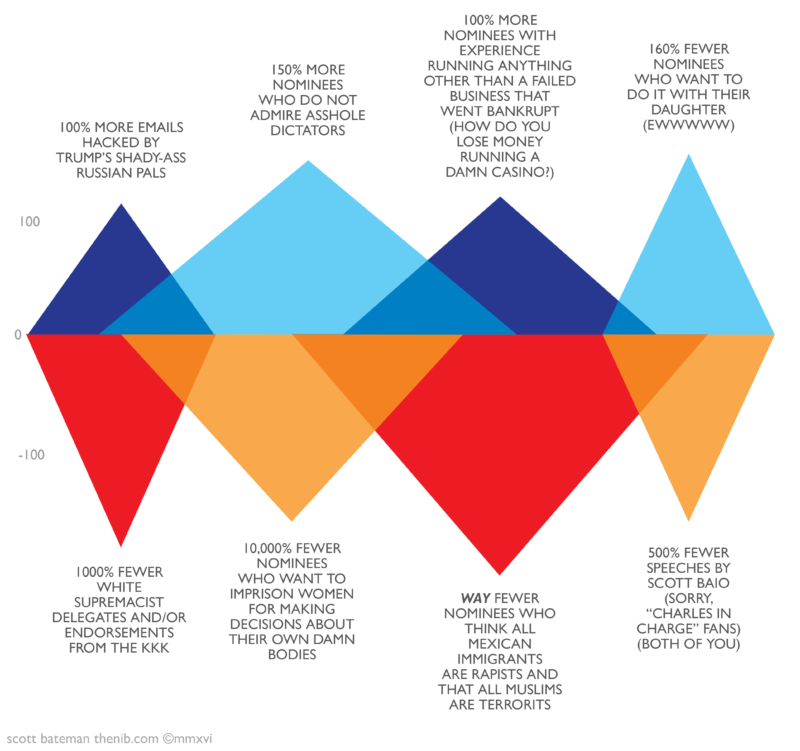 And speaking of “Trump’s Shady-Ass Russian Pals”, new evidence strongly links the hacker of the DNC emails to Russia. In summary:

While the FBI is still investigating the hack of the DNC servers, evidence is mounting that the hacker, known as Guccifer 2.0 and who may well be a group of people rather than one individual, is based in Russia. Guccifer 2.0 communicates with journalists using different email accounts each time, to make it harder to trace the true origin. But it now appears the anonymity software being used is associated with a Website, Elite VPN, that is largely in Russian. When the cybersecurity firm ThreatConnect tried signing up for an account, they discovered the entire signup process was only in Russian. Guccifer 2.0 claims to be a Romanian, but when he sends messages in Romanian, they are clunky and give the impression they were produced by an online translation service.

The software used to hide Guccifer 2.0’s identify is only one piece of evidence indicating a Russian connection. The service used is not free and the payment methods use Russian financial institutions. The methods, tools, and command servers used in the DNC hack have been used by Russian intelligence before. Rich Barger, CIO and cofounder of ThreatConnect, said: “The noose is tightening around Russia.” If it turns out that the Russian government is trying to influence a U.S. election, the consequences could be unforeseen and severe, including a possible new Cold War.

If you liked this, you might also like these related posts:
This was written by Iron Knee. Posted on Wednesday, July 27, 2016, at 7:08 am. Filed under Irony. Tagged Russia. Bookmark the permalink. Follow comments here with the RSS feed. Both comments and trackbacks are currently closed.