On December 12, at 8:26am, apparently out of the blue, Donald Trump made the following tweet: 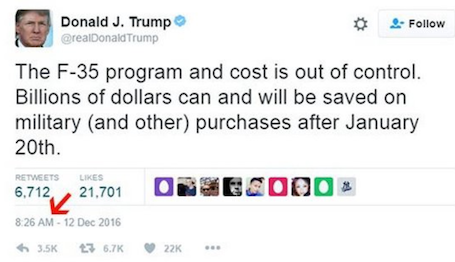 The stock of Lockheed-Martin immediately dropped 4%, losing $4 billion in a few minutes.

But there was no obvious trigger for Trump’s tweet this time. Even more suspiciously, six minutes before Trump’s tweet hit the innertubes, someone started dumping large amounts of Lockheed-Martin stock, which would indicate they knew the tweet was coming.

We don’t know who was dumping stock before the tweet. Because we know almost nothing about Trump’s finances, it could have been Trump himself. Or a family member, or a friend. Chris Christie or Rudy Giuliani. Or Putin. Or someone blackmailing Trump.

Insider trading is illegal. Even worse, the president benefiting from something done by a foreign government is unconstitutional, and is grounds for impeachment.

Now that the Benghazi committee has nothing to do, maybe they should investigate this. Over and over (and over) again.

This was written by Iron Knee. Posted on Thursday, December 15, 2016, at 12:30 am. Filed under Irony. Tagged Conflicts of Interest, Trump. Bookmark the permalink. Follow comments here with the RSS feed. Both comments and trackbacks are currently closed.