Build a wall to keep out illegal immigrants from Mexico? Block refugees from entering the US? Ban even visitors from Muslim countries?

And that’s just what the Trump administration says they want to do. It doesn’t include recent incidents like the son of legendary boxing champion Muhammad Ali being detained for hours when entering the US at a Florida airport (after speaking at a Black History Month event in Montego Bay, Jamaica), even though he was born in Philadelphia and lives in Florida, had his US passport with him, and has no criminal record.

His mother, who was traveling on the same flight, was allowed through after she showed immigration officials a photo of herself with her late husband. However, Muhammad Ali Jr. was questioned for two hours, and asked repeatedly “Where did you get your name from?” and “Are you Muslim?” To give you an idea of how disgusting this is, can you imagine if an American citizen returning to the US was detained for hours and repeatedly asked “Are you a Jew?”

So, why are we thinking of spending tens of billions of dollars to build a 2000 mile long wall, hire 5000 more border agents and 10,000 more ICE agents, build more prisons to hold people we round up, not to mention the money that will be spent on lawsuits because of little details like the fact that our constitution prohibits discriminating against people based on their religion. Are we facing some kind of existential crisis? Are we in immediate danger from immigrants, either legal or illegal?

The answer is a resounding no. The immigration crisis is a myth.

First, let’s look at illegal immigration. Beginning in 2008, the US saw a dramatic outflow of illegal immigrants caused by the recession. Yes, that’s right, undocumented aliens from Mexico returned home (Mitt Romney might even say they “self deported”). Even after the recession ended, we are still seeing a net outflow of undocumented aliens. So if the border wall does anything at all (which it won’t — around half of illegal aliens entered the US with a visa and just didn’t leave, and there are already many tunnels underneath existing border walls) it will be to keep these undocumented workers inside the US.

Even if you thought there was an illegal immigration problem in the early 2000s, we already pretty much solved that problem through increased deportation, and (most significantly) making it much harder to hire illegal aliens.

As for Trump’s Muslim ban, it is plainly ridiculous. Trump’s ban only affected seven countries, and we haven’t had any successful terrorist attacks by anyone from any of those countries in decades (since before 9/11). We have had terrorist attacks by citizens from other countries, but the ban was not applied to them. Countries like Saudi Arabia, Egypt, Lebanon, and the UAE. Could it be because Trump has business interests in those countries?

In fact, the Trump administration asked the Department of Homeland Security to provide evidence that people from the seven countries in his ban pose a terrorism threat, but the DHS found that the threat was minimal.

Not only that, but unconstitutional restrictions against Muslims are more likely to cause problems than solve them. They will further isolate us from our friends an allies in the rest of the world, and inflame already simmering hatred.

In conclusion, Trump’s proposed actions against immigrants and visitors from other countries are expensive solutions in search of a problem. When did we forget that we are a nation of immigrants, and start blaming people from “other” countries for any and all of our problems? 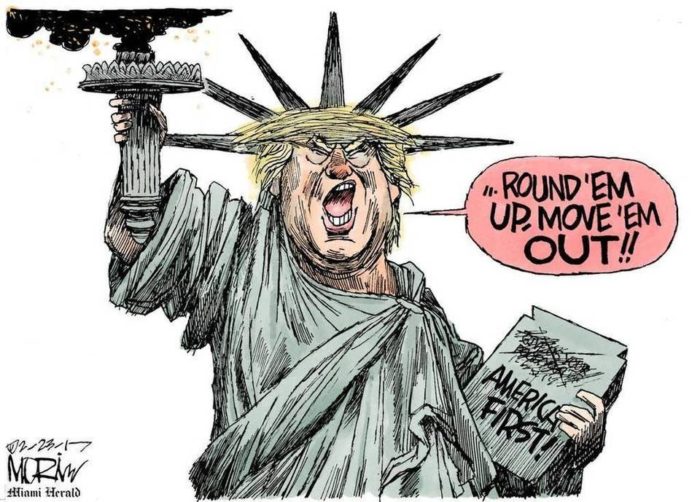 This was written by Iron Knee. Posted on Tuesday, February 28, 2017, at 12:30 am. Filed under Hypocrisy. Tagged Immigration, Muslims, Racism, Terrorism. Bookmark the permalink. Follow comments here with the RSS feed. Both comments and trackbacks are currently closed.