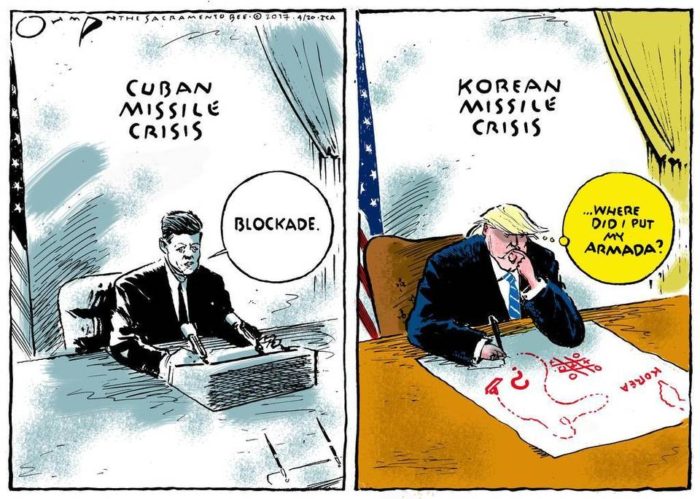 Last week, Donald Trump claimed that he ordered an American aircraft carrier into the Sea of Japan to act as a deterrent to North Korea. In fact, he told Fox News “We’re sending an armada”.

Naturally, that was a lie. The aircraft carrier in question was actually sailing in the opposite direction.

The lie only came to light when someone in the Navy posted a photo of the carrier sailing south through the Sunda Strait, enroute to Australia, 3,500 miles southwest of Korea.

After that photo surfaced, the carrier was turned around in order to head to Korea.

Nobody in the White House is offering any explanation. It is pretty clear that Trump will just say whatever comes into his head, without the least bit of regard for reality.

This was written by Iron Knee. Posted on Friday, April 21, 2017, at 12:30 am. Filed under Irony. Tagged Lies, Military, War. Bookmark the permalink. Follow comments here with the RSS feed. Both comments and trackbacks are currently closed.