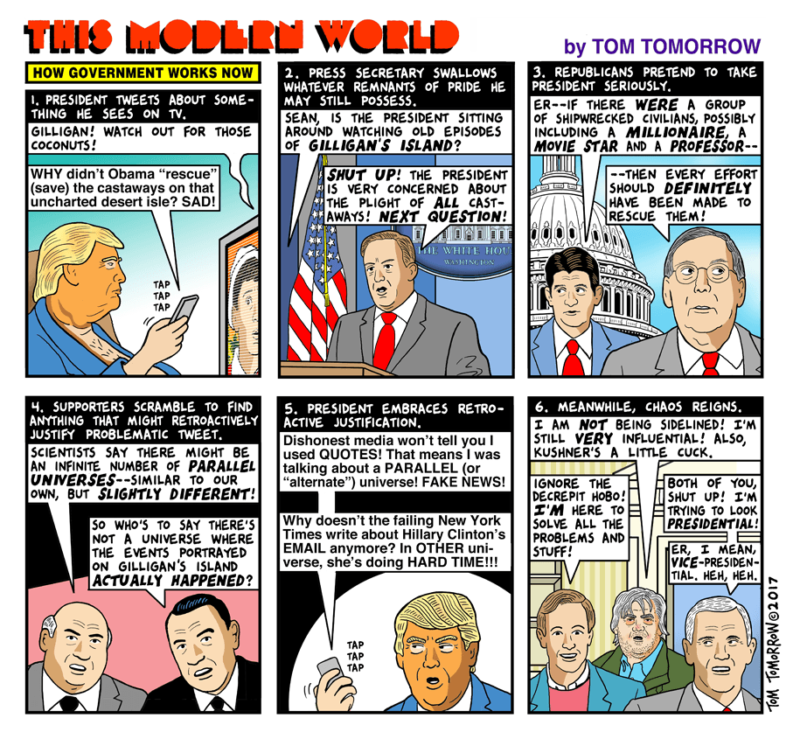 Ironically, this comic is an example of the very thing it is making fun of. According to Tom Tomorrow:

This cartoon was initially inspired by Trump’s “Obama tapped my wires” tweets, and the laughably supportive GOP response. It was supposed to run a couple weeks ago, but I ended up bumping it for a last-minute cartoon on the Syria missile strike. Bannon had just been kicked off the NSC at that point; I wasn’t entirely sure he’d still be in the White House by the time this one finally ran. It’s not easy staying ahead of the news these days.

So, before he could make fun of one thing Trump tweeted, something else happened, then something else, and so on. Who can keep up?

There’s a really good opinion piece in The Guardian titled “100 days of gibberish – Trump has weaponised nonsense“. I recommend you go read it, but here’s a short excerpt:

Trump lies relentlessly about his achievements (claiming, for example, that he’s “mostly there” on his 100-day plan, despite appearing not to know what it is), admits he “never realised” how big a job it is to be president, forgets how many missiles he fired at Syria, even though he got the number right only 17 words earlier, and compares his TV ratings favourably to those for 9/11.

But one of the funniest parts is when it talks about a conversation Trump had with congressman Elijah Cummings (D-MD). Trump recalls the his talk with Cummings:

Well he said, you’ll be the greatest president in the history of, but you know what, I’ll take that also, but that you could be. But he said, will be the greatest president but I would also accept the other. In other words, if you do your job, but I accept that. Then I watched him interviewed and it was like he never even was here. It’s incredible. I watched him interviewed a week later and it’s like he was never in my office. And you can even say that.

Can you even understand what Trump is saying? Even worse:

Cummings remembers the exchange differently, explaining that he told Trump he “could be” a great president if he stopped doing literally everything that he was doing and started doing other stuff that wasn’t horrible instead.

Even when Trump can’t form a complete, coherent sentence, he still manages to lie.

But there is an even scarier explanation. Vanity Fair recently published “Is Trump’s Chaos Tornado a Move From the Kremlin’s Playbook?” The whole article is worth a read, but the short version is that the constant lies (and doubling down on lies), shifting positions, and apparent hypocrisies creates a “permanent state of disorder: a de-stabilized media, an exasperated citizenry, and a fractured opposition, divided and pulled into mudslinging sideshows.” Sound familiar?

Indeed, Trump’s barrage of tweets that lie and contradict makes it impossible for the press to conduct any “vigilant analysis or coherent investigation into his administration” and its conflicts of interest, nepotism, racism, or even treason. Instead, it provides a subliminal message that provokes an emotional response so confusing and annoying that people just tune out:

This shape-shifting propaganda makes just enough of a lasting impression to leave people feeling distrustful and victimized. But before any one line of thinking can be pursued for too long, the narrative jumps to something else. People are left distracted and angry, but unsure of why or at whom.

After all, if facts don’t exist because people no longer care enough to distinguish reality from lies, then nobody can hold Trump accountable. For example, it becomes acceptable to not show your taxes. And this toxic cynicism promotes the idea that all politicians (and political parties) are equally corrupt, so there is no incentive to even vote.

By clogging the news with mini-scandals, bald-faced lies, and provocative tweets, the White House sends journalists and media outlets into haphazard frenzy. President Trump’s lies alone have become their own beat, forcing publications to devote precious resources to invalidating the many outrageous claims he makes daily, sometimes within a single interview. White House press secretary Sean Spicer’s early press conferences suggest that he too will serve as media antagonist, baiting reporters with arrogant fallacies and extending the Trump regime’s brand of bullying truth and democratic values into wary submission.

Facts are replaced by “alternative facts”. Trump continues to insist that millions of people voted illegally in the presidential election. The rule of law is replaced by the rule of the jungle as people become so angry and frightened that even a dictatorship starts to sound preferable to what we have.

The end result? Our constitution and our democracy are lost.

This was written by Iron Knee. Posted on Wednesday, April 26, 2017, at 12:30 am. Filed under Hypocrisy. Tagged Lies. Bookmark the permalink. Follow comments here with the RSS feed. Both comments and trackbacks are currently closed.