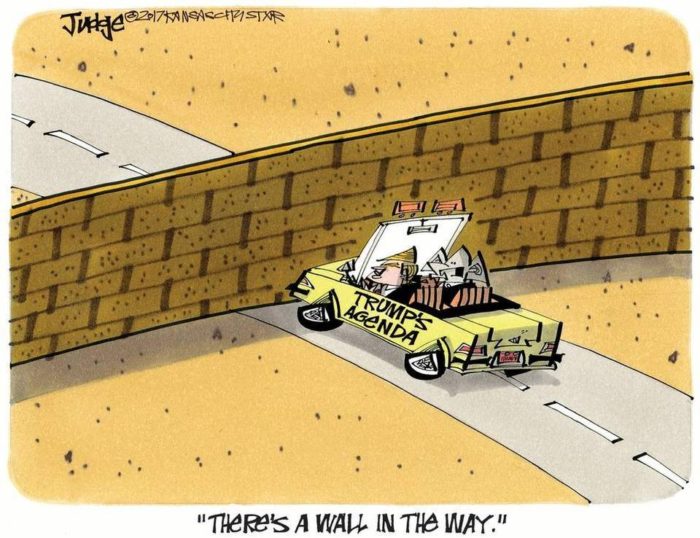 One day after trying to fund the wall, Donald Trump backed off and said he would do it later. Sorry, Trump voters, you got scammed.

This is happening more and more, and seems to be some kind of strategy for Trump. He proposes something that he knows will not pass, doesn’t really try very hard, and then gives up.

In the end, he has accomplished almost nothing. But he can blame it on the Democrats, or the Republicans, or the Freedom Caucus, or moderates, or judges, or the media. You know, anyone but himself.

In addition to avoiding any responsibility for his own failures, he is setting himself up to attack these other groups. Another example is that yet another of his crazy unconstitutional executive orders was blocked by a judge. In response, Trump attacked the judge, and then did something really bizarre — he proposed breaking up the Ninth Circuit Court of Appeals. Never mind that it wasn’t the Ninth Circuit court that blocked his latest executive order.

Trump the dictator wants to rule by executive fiat (like a CEO), and if anything gets in his way, he wants to fire them. Let’s hope that we still have a country where things like that don’t work.

This was written by Iron Knee. Posted on Thursday, April 27, 2017, at 1:12 am. Filed under Hypocrisy. Tagged Executive Orders, Justice. Bookmark the permalink. Follow comments here with the RSS feed. Both comments and trackbacks are currently closed.