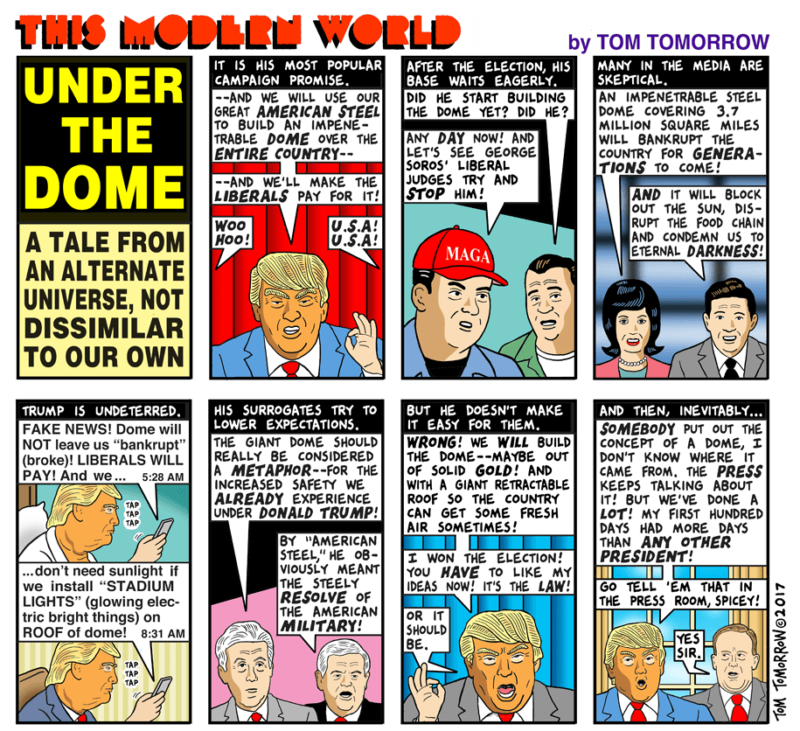 This comic may seem a little far fetched, but is it really any crazier than what Trump is proposing with the wall? After all, the communists built a wall around West Berlin, which only had to be 96 miles long, and it included frequent guard towers, anti-vehicle trenches, and a second wall to create a “death strip”. And yet, thousands of people still managed to escape by going over and under the wall, floating across rivers, or even flying ultralight aircraft.

On the other hand, the US-Mexico border would have to be around 2000 miles long, traverse difficult terrain, and deal with the problem of having a large body of water at each end. The Bush administration actually built a fence between the US and Mexico, but it was only 670 miles long and only covered the easier and less costly areas to fence. And yet, this fence (not a wall) cost $2.4 billion. And after it was built, the US Customs and Border Patrol admitted that it wasn’t doing what it was supposed to do.

Not to mention at this point, more Mexicans are leaving the US then entering, so even if the wall could possibly work, it wouldn’t do what Trump wants it to do.

This was written by Iron Knee. Posted on Tuesday, May 2, 2017, at 2:16 am. Filed under Irony. Bookmark the permalink. Follow comments here with the RSS feed. Both comments and trackbacks are currently closed.