It seems like almost everything Donald Trump complains about, he himself is guilty of. Here is a tweet from 2012 that is yet another example: 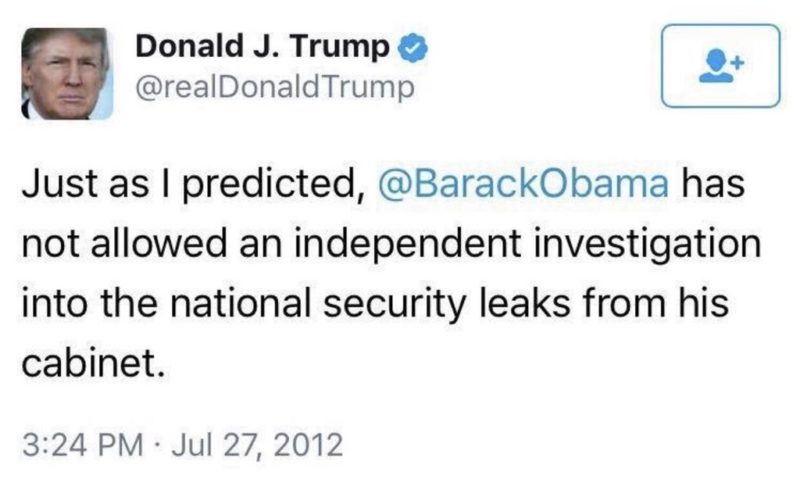 Well, we got an independent investigation anyway, but the Justice Department had to do it behind the back of the White House.

Ironically, everyone on both sides of the aisle seems to be happy about it. In fact, even Donald Trump took the news without throwing a temper tantrum. That’s the good news today — Trump bowed to the inevitable without publicly embarrassing himself or the country. We are so easily surprised.

UPDATE: Of course, Trump later unleashed a tweet storm, saying that the investigation is “the single greatest witch hunt of a politician in American history“. Cough, Benghazi. Trump also accused Obama and Clinton of “illegal acts”.

Speaking of “acts”, while the Israeli government is smart to avoid criticizing Donald Trump for giving terrorism intelligence to the Russians that was originally supplied by Israel, former Israeli spymasters were highly critical of Trump. For example, the former head of the Israeli intelligence agency called Trump a “bull in a china shop” and said “If tomorrow I were asked to pass information to the CIA, I would do everything I could to not pass it to them.” Is this how Trump is going to protect us from terrorism?

This was written by Iron Knee. Posted on Friday, May 19, 2017, at 12:24 am. Filed under Hypocrisy. Tagged Russia, Trump. Bookmark the permalink. Follow comments here with the RSS feed. Both comments and trackbacks are currently closed.