In a recent Reuters interview, President Trump reflected on his first 100 days in office saying, “I thought it would be easier.” What made you think it was going to be easy? This is what it did to a SMART person [shows 2008 and 2017 photos of Obama]. By the time you’re out of office, you’re going to look like the Toxic Avenger. – Seth Meyer 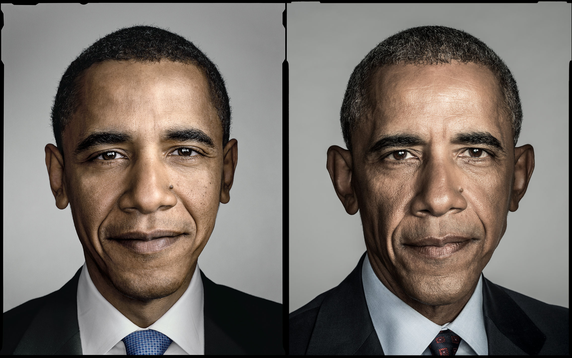 President Trump just did an interview where he wondered why the Civil War ever happened. Then Education Secretary Betsy DeVos said, “That’s easy, Captain America and Iron Man got in a big fight.” – Jimmy Fallon

Trump also said that Andrew Jackson was really angry about the Civil War, but Andrew Jackson actually died 16 years before it started. Trump said he’ll apologize to Jackson when they play golf together next week. – Jimmy Fallon

President Trump questioned why America fought the Civil War. You know, at this rate the only way Trump is going to get a second term is if he’s held back. “All F’s? I flunked everything? I got a B+ in phys ed.” – Seth Meyer

President Trump also said he would be honored to meet North Korean dictator Kim Jong Un. Trump said, “He’s my kind of guy — he’s crazy, he’s overweight, and he has a ridiculous haircut. We should get together!” – Conan O’Brien

Trump’s keeping busy — in fact, he invited the leader of Thailand to visit the White House. But Trump thinks Thailand is just a clothing chain that sells really long ties. – Jimmy Fallon

Trump defended all his trips that he’s made to his golf courses, saying that he only goes there to hold meetings. Even guys who go to Hooters for the wings were like, “Yeah, right.” – Jimmy Fallon

President Trump said yesterday that being president has been a big burden on his family. “Yes, but somehow we manage,” said Melania from her penthouse in New York. – Seth Meyer

An Australian family managed to save the life of a lizard they found at the bottom of their pool by performing CPR on it. Can you imagine putting your lips on a lizard? And then Melania Trump was like, “Yeah, I can.” – James Corden

I consider myself a confident guy. But I have never ever, not even after six drinks, thought to myself, “I could probably give CPR to a lizard.” That family revived the lizard by performing CPR for 30 minutes. I give up looking for the TV remote after 25 seconds. – James Corden

The creators of Fyre Festival, a luxury music festival that left attendees on an island without adequate food, water, shelter, or medical care, are all being sued for $100 million. If you want to attend the trial, tickets start at $5,000. – Conan O’Brien

It was announced today that Kelly Ripa’s new co-host will be Ryan Seacrest. Seacrest was relieved, and said those 20 minutes he wasn’t on television were the scariest of his life. – Conan O’Brien

Taco Bell just announced that it will be adding beer to the menu at certain restaurants in Canada. It’s the first time that going to Taco Bell will lead to getting drunk and not the other way around. – James Corden

This was written by Iron Knee. Posted on Sunday, June 4, 2017, at 12:37 am. Filed under Humor. Bookmark the permalink. Follow comments here with the RSS feed. Both comments and trackbacks are currently closed.