Eric Trump doesn’t hold back, and tells Sean Hannity what he really thinks about Democrats:

I’ve never seen hatred like this. To me, they’re not even people. It is so so sad. Morality is just gone. Morals have flown out the window. We deserve so much better than this as a country. It’s so sad — you see the Democratic Party and they are imploding. They’re imploding, they have no message. You see the head of the DNC who is a total whack-job. There’s no leadership there. And so what do they do? They become obstructionists because they have no message of their own.

Watch him say it:

Wow. What level of hatred is it to say that Democrats aren’t even people, to completely dehumanize them? That would be like if I posted this screen grab from the interview, and said that Eric Trump is clearly not human, and is a vampire about to feast on Hannity’s blood and steal his soul. 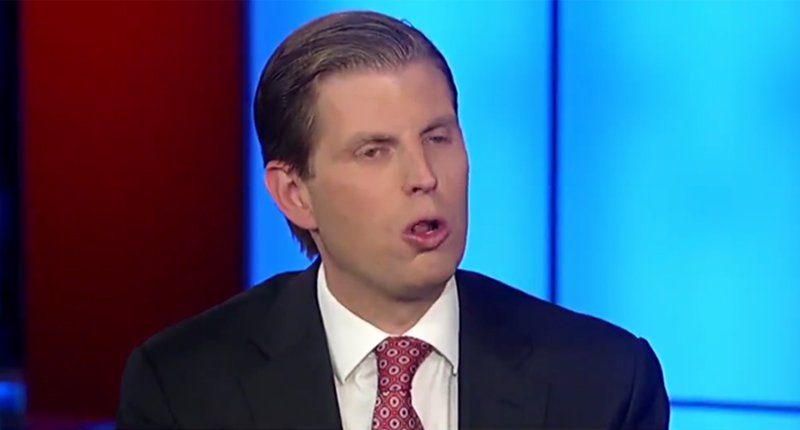 But I would never say such a thing. Because I’m not sure if Hannity has a soul any more. His ratings are way down.

In fact, the ratings of pretty much all Trump-supporting media are down. Worst off is Breitbart News, whose site traffic has dropped 53% since November, and their advertisers and sponsors have plummeted from 242 as recently as March down to 26 (that is not a typo — an order of magnitude) in May. I guess Breitbart’s base was happier back when they were publishing anti-Obama propaganda instead of the current pro-Trump propaganda.

The same thing seems to be true of Sean Hannity. In the video above you can hear Hannity interrupt as soon as Eric Trump stops attacking Democrats and starts defending and praising Donald Trump and his family (i.e., himself).

My question is, does Eric Trump have a message of his own? Because his whole family seems to be imploding.

This was written by Iron Knee. Posted on Friday, June 9, 2017, at 12:37 am. Filed under Hypocrisy. Tagged Democrats, Trump. Bookmark the permalink. Follow comments here with the RSS feed. Both comments and trackbacks are currently closed.