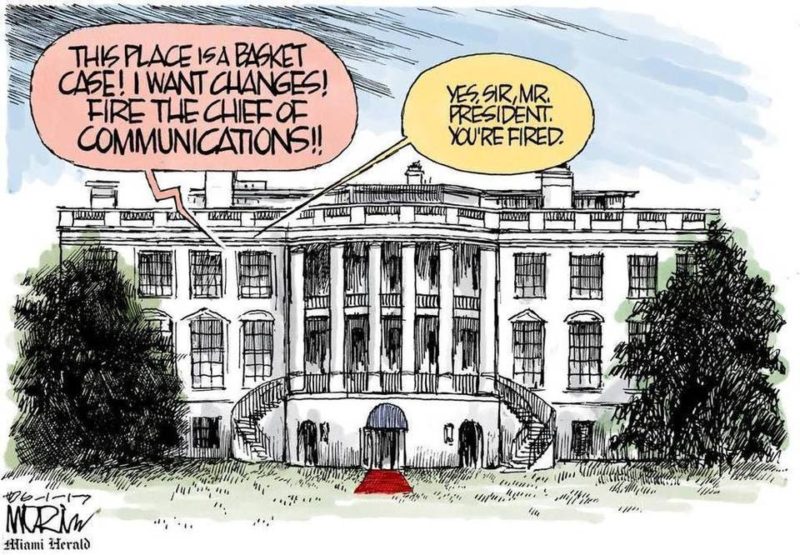 Despite Donald Trump tweeting “I am being investigated” this week, one of his lawyers is saying that Trump is not under investigation and blames the media. So, who are we to believe?

UPDATE: Speaking of bad communication, when the House first passed the AHCA, Trump and the Republicans praised the bill. Just a month ago Trump said “This is a great plan” and had a celebration at the White House. And why wouldn’t they celebrate? The Republicans (including Trump) have been promising to repeal Obamacare since before it was even law.

And then, a week ago, Trump opened his mouth and told Republican Senators that the bill passed by the House was “mean” and urging them to change it. I don’t disagree with Trump — the bill is mean — but just think of what it does to the Republicans.

The House bill was barely passed, mainly because the Freedom Caucus didn’t like the original GOP bill (because it wasn’t mean enough). So if the Senate follows Trumps advice and makes the bill more generous, how will Trump get the House to agree to the revised bill? If this is Trump’s art of the deal, then it is bad art.

But that isn’t even the worst aspect of Trump’s shoot-from-the-hip comment. He just handed the Democrats a potent weapon against the Republicans in the 2018 midterm elections. Just imagine the ads showing Trump celebrating the passage of a bill that he himself says is “mean”. A majority of Americans like Obamacare and do not want it repealed. And the AHCA was very unpopular, with only 17% of Americans viewing it as positive. Every Republican who voted for the AHCA now has a target on their back.

This was written by Iron Knee. Posted on Monday, June 19, 2017, at 12:30 am. Filed under Hypocrisy. Tagged Media, Trump. Bookmark the permalink. Follow comments here with the RSS feed. Both comments and trackbacks are currently closed.