The Republicans are still trying to repeal Obamacare. It is ironic that back when Obama was president, the Republicans didn’t have any problem passing bills to repeal the ACA, because they knew that Obama would veto them. But now, even though they control both houses of Congress and the presidency, they can’t do squat because they are too chickenshit to live with the consequences.

Despite almost a decade of lying propaganda designed to make Obamacare unpopular (remember “Death Panels”?) the ACA is so popular (even with its flaws) that the Republicans are afraid to do what they have promised their base. Instead, they claim that the Democrats are obstructionists, which is hilarious on so many levels.

They are still the party of no — they have no policy ideas of their own so everything they do is just repealing and destroying anything done by Obama and the Democrats. They claim they are making America great again, but does anyone really want to go back to the 50s (the Cold War and fear of nuclear armageddon)? Or worse. They may take us back to the 40s (WWII) or the 30s (Great Depression). At the rate they are currently going, it could be all of the above.

But now they are in a quandary. In order to cut taxes for the rich, they have to come up with some cash so they can pass the tax cuts using budget reconciliation. So they are promising everything — including coverage of preexisting conditions and lower premiums — while their only real goal is to save enough money to cut taxes for the rich. So they lie and make promises that are impossible to keep. They don’t let anyone read the bill or evaluate it and instead wait until the last minute (before Congress goes into recess for the rest of the summer) to reveal it and insist that everyone pass it.

It is not a pretty sight. 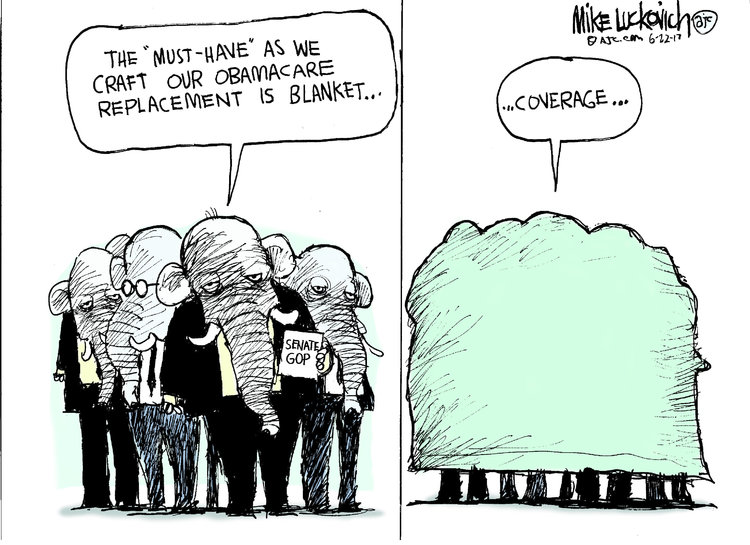 This was written by Iron Knee. Posted on Thursday, June 22, 2017, at 9:02 am. Filed under Irony. Bookmark the permalink. Follow comments here with the RSS feed. Both comments and trackbacks are currently closed.