If there was any doubt that conservatives — especially social conservatives who used to champion “respectable social behavior” — have completely lost any and all moral authority, you just have to look at the current situation with Supreme Court nominee Brett Kavanaugh. Social conservatives have been pretending to hold the moral high ground, opposing supposed sins including gay marriage, abortion, even (and especially) premarital sex. Even birth control, as if sex without procreation is a sin.

Yes, the same people who condemn birth control and premarital sex are now at best silent and at worst condoning sexual assault, claiming that if you even investigate (never mind punish) Kavanaugh for what he is accused (by multiple women) of doing, then you would disqualify all men from being on the Supreme Court.

I guess I missed that memo when I was a teenager. I don’t remember even being tempted to do any of these things that social conservatives are calling “normal” and “acceptable” for young men.

If that were actually true, then perhaps it would be a good idea to disqualify all men from the Supreme Court. 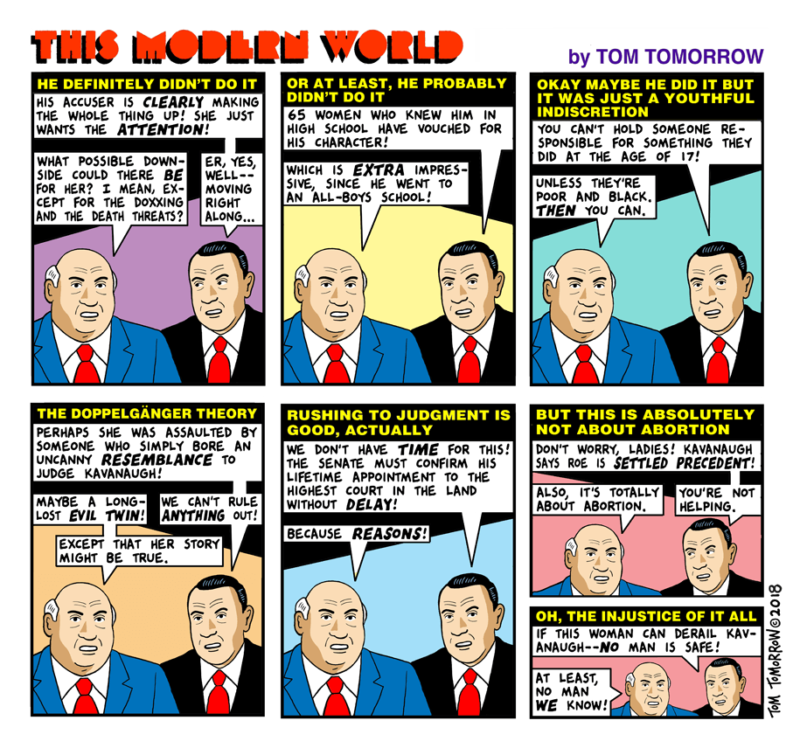 This was written by Iron Knee. Posted on Wednesday, September 26, 2018, at 9:54 pm. Filed under Hypocrisy. Tagged Conservatives, Republicans, Sex. Bookmark the permalink. Follow comments here with the RSS feed. Both comments and trackbacks are currently closed.