I know none of this is a surprise, but given that Trump’s campaign rallies have gotten so old and tired that even Fox News isn’t broadcasting them live anymore, this seems particularly germane.

Yesterday, Donald Trump defended his decision to proceed with a political rally in Pennsylvania as hurricane Michael devastated the Florida panhandle and wreaked havoc across the SE US. His excuse? He claimed that he could not disappoint his many fans. Seriously.

On a telephone call to “Fox and Friends”, Trump said:

We had thousands of people standing on line. It’s a great thing that’s happening. It’s a great movement in our country. I go make a speech in a 12,000-seat auditorium, and people start lining up two days early. I mean, literally, they bring tents.

But the local newspaper reports that the capacity of the auditorium is 9000, something that is easily verified. And the line for the rally did not start two days early, as Trump claims, it started earlier the same day as the event, around 12 hours early.

Trump lies for absolutely no reason. Even if the lies are easily disproved. And just to feed his own ego. But it gets worse.

Add hypocrisy to this. Trump excoriated Barack Obama in 2012, tweeting:

And that was for Obama campaigning days after hurricane Sandy dissipated, while Trump was happy to campaign while hurricane Michael was actively killing people and destroying whole towns. Talk about fiddling while your country burns.

And to add insult to literal injury, during the campaign rally Trump mocked the #MeToo movement. 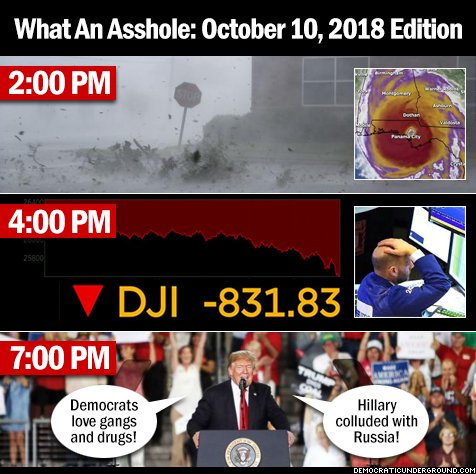 This was written by Iron Knee. Posted on Friday, October 12, 2018, at 12:14 am. Filed under Hypocrisy. Tagged Weather. Bookmark the permalink. Follow comments here with the RSS feed. Both comments and trackbacks are currently closed.