I was pleasantly surprised by Elizabeth Warren’s policy announcement.

Yes, I know that this was done in the context of announcing her formation of an presidential exploratory committee, but let’s ignore for a moment whether or not she would make a good president (I’ve seen more than enough of that, given that it mostly consists of juvenile name calling).

Ironically, Warren is essentially a defender of capitalism to me. Like Warren, I am a “capitalist to my bones” (I’ve started a number of companies and served as a CEO). But unlike the far right and some large corporations, I understand the important role that government plays in supporting capitalism by establishing and enforcing a level playing field. For example, Warren and I agree that monopolies are an anathema to vibrant capitalism. Competition is destroyed by companies that are “too big to fail” (and, as Warren put it, “too big to jail”). Without competition, capitalism becomes fascism.

I also agree that there are a few important functions that should not be organized under capitalist principles. For example, few people would argue that we should privatize our military, or our police and fire departments. Thus, I believe that the nature of health care makes a free market unsustainable (if you are in a serious car accident are you really going to shop around for the best value in health care? Of course not). So, I agree with Warren that “Medicare for all” would currently be the best solution.

I also believe that we should be striving for “equal opportunity” for all. It isn’t just that people deserve the opportunity to succeed. That’s important too, but the major point is that if the best and the brightest have an equal opportunity to raise to the top and enjoy success (like it was in the early days of the internet), then everyone wins. Or do you actually prefer an economy where the deck is stacked against you?

Back to the issue of name calling, I believe that the current American aristocracy must be scared witless by Elizabeth Warren, because she is challenging their privilege and power. Thus their attacks against her. Regardless of whether she becomes the next president, I think her positions and ideas deserve more discussion and implementation. That is, unless you actually believe that a few large corporations having all the power in this country is really the best we can do. 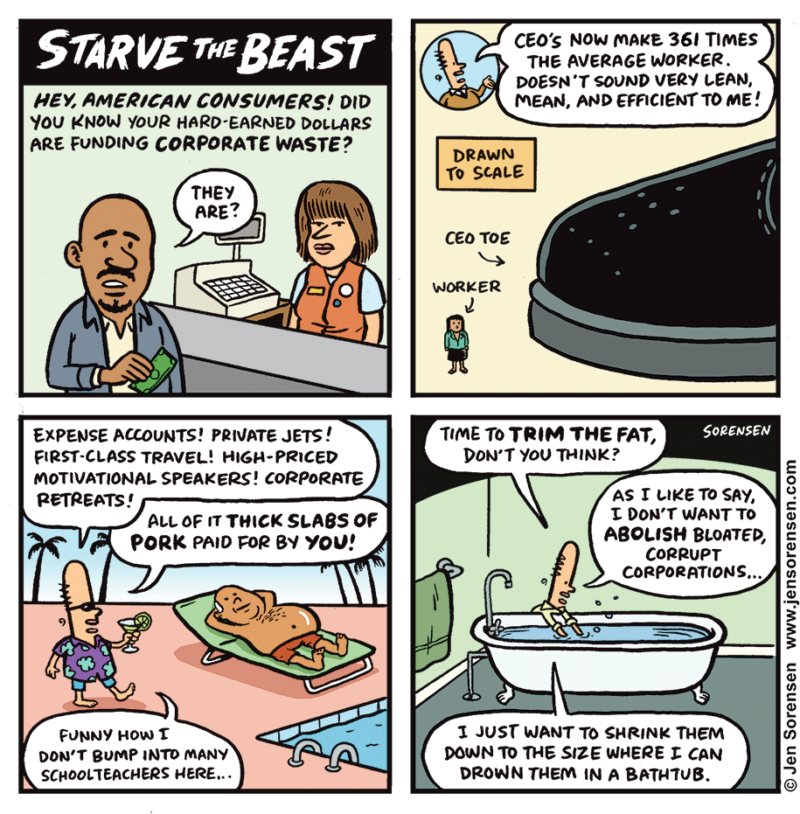 This cartoon, of course, references Grover Norquist’s famous line about wanting to reduce government to the size where he could drown it in a tub, like some unfortunate critter. One concept anti-government types aren’t too clear on is that waste is hardly unique to the public sector. I’m not saying government programs are necessarily more efficient than privately-run ones (although in the case of health care, public plans are massively more cost-effective). But money out of your pocket is money out of your pocket, whether it’s going to the guv’mint or a corporation.

This was written by Iron Knee. Posted on Tuesday, January 1, 2019, at 8:59 am. Filed under Irony. Tagged Corporations, Economy, Monopolies. Bookmark the permalink. Follow comments here with the RSS feed. Both comments and trackbacks are currently closed.