What if they held a convention, and nobody came?

Republicans just can’t get a break.  In April, the Nevada Republican party held their state convention, but then abruptly shut it down when Ron Paul supporters were about to elect their own delegates to the national convention. The Republicans promised to reconvene a new state convention this month, but have now cancelled those plans, claiming that they couldn’t generate enough interest for it (so far, they had received 300 RSVPs, and needed 675 for a quorum). Instead, the party’s executive board will have a private conference call to decide whom from Nevada will attend the Republican National Convention.

I don’t know which is worse — claiming that nobody is interested in going to your convention, or canceling the convention because things didn’t go the way the bigwigs wanted. Either way, as former congresswoman Barbara Vucanovich says “Frankly, its an embarrassment for our state and also makes it difficult for John McCain.” 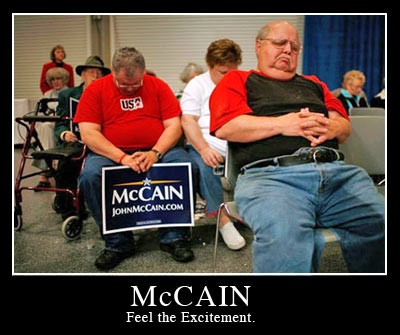 This was written by Iron Knee. Posted on Monday, July 21, 2008, at 5:03 pm. Filed under Hypocrisy. Tagged Republicans. Bookmark the permalink. Follow comments here with the RSS feed. Both comments and trackbacks are currently closed.