Following the problems in the sub-prime lending market in America and the run on HBOS in the UK, the financial crisis has now hit Japan.

In the last 7 hours Origami Bank has folded, Sumo Bank has gone belly up and Bonsai Bank announced plans to cut some of its branches.

Yesterday, it was announced that Karaoke Bank is up for sale and will likely go for a song, while today shares in Kamikaze Bank were suspended after they nose-dived.

Samurai Bank is soldiering on following sharp cutbacks, Ninja Bank is reported to have taken a hit, but they remain in the black.

Furthermore, 500 staff at Karate Bank got the chop and analysts report that there is something fishy going on at Sushi Bank where it is feared that staff may get a raw deal. 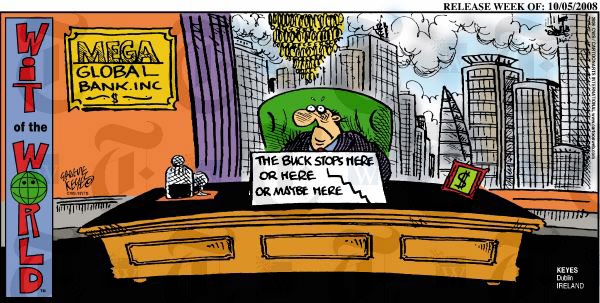 This was written by Iron Knee. Posted on Saturday, October 11, 2008, at 12:27 am. Filed under Humor. Tagged Economy. Bookmark the permalink. Follow comments here with the RSS feed. Both comments and trackbacks are currently closed.