I know, I know, I run a blog called “Political Irony” but sometimes something comes along that is so ironic that it boggles even my jaded mind. Esquire Magazine has a fascinating report on the political views of white supremacists, racists, and other hate-mongers and finds that many of them are supporting Obama for the presidency! Here are some of their views:

White people are faced with either a negro or a total nutter who happens to have a pale face. Personally I’d prefer the negro. National Socialists are not mindless haters. Here, I see a white man, who is almost dead, who declares he wants to fight endless wars around the globe to make the world safe for Judeo-capitalist exploitation, who supports the invasion of America by illegals–basically a continuation of the last eight years of Emperor Bush. Then, we have a black man, who loves his own kind, belongs to a Black-Nationalist religion, is married to a black women–when usually negroes who have ‘made it’ immediately land a white spouse as a kind of prize — that’s the kind of negro that I can respect.

The corporations are running things now, so it’s not going to make much difference who’s in there, but McCain would be much worse. He’s a warmonger. He’s a scary, scary person–more dangerous than Bush.

Erich Gliebe, chairman of the National Alliance and former pro boxer with the nickname “The Aryan Barbarian”:

Obama might be a better candidate for our cause because he’s racially conscious. … I give Obama credit, he seems to have stuck to his guns as far as pulling the troops out of Iraq. He’s a very intelligent man, an excellent speaker and has charisma. John McCain offers none of that. Perhaps the best thing for the white race is to have a black president. My only problem with Obama is perhaps he’s not black enough. 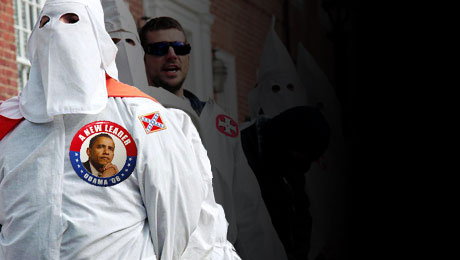 This was written by Iron Knee. Posted on Sunday, November 2, 2008, at 10:55 am. Filed under Irony. Bookmark the permalink. Follow comments here with the RSS feed. Both comments and trackbacks are currently closed.