Bush in Race against Time to Wreck Country

Bush in Race against Time to Wreck Country

Legacy of Destruction at Stake 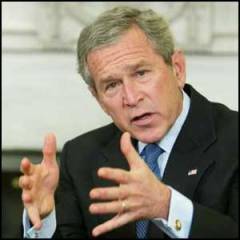 Confounding the conventional wisdom that he is a lame duck president with no agenda as his days in office dwindle, President George W. Bush is redoubling his efforts to mutilate the country before his term expires, aides confirmed today.

“President Bush has spent the first seven years and ten months of his presidency doing everything in his power to leave the United States in smoldering ruins,” said White House spokesperson Dana Perino.  “He certainly is not going to let the final days of his tenure go to waste.”

While Ms. Perino said that President Bush is proud to have led the U.S. into a “pointless and totally avoidable catastrophe in Iraq” and “the most terrifying financial cataclysm since the Great Depression,” he is “in no way prepared to rest on his laurels.”

Mr. Bush is “delighted,” Ms. Perino said, that the stock market has lost one trillion dollars of its value in the last three days, but “that’s just the tip of the iceberg in terms of the damage he hopes to wreak in his remaining time in office.”

Among the targets for destruction that the President is currently eyeing, Ms. Perino indicated that the demise of the Big Three automakers was at the top of his list.

“If the President could preside over the disappearance of the Big Three and the millions of jobs they represent, that would be the ultimate feather in his cap,” she said.

For his part, Mr. Bush took few questions from reporters today, saying that he had to return to the Oval Office to order random airstrikes over Belgium.

This was written by Iron Knee. Posted on Wednesday, November 19, 2008, at 10:05 am. Filed under Irony. Tagged Bush. Bookmark the permalink. Follow comments here with the RSS feed. Both comments and trackbacks are currently closed.