Watching Obama’s press conference last night got me thinking again about the whole issue of bipartisanship. I’ve come to the conclusion that it really is pretty simple.

First, one of the biggest issues in the last election was the economy. When businesses started to fail and people started losing jobs, McCain’s poll numbers went down in parallel. Obama’s numbers — and Democratic numbers in general — went up. People often vote their pocketbook, and when the economy crashes, people decide that it is time for a change.

Now that Obama is president, if he is able to fix some of the problems that he inherited from Bush, then this will make Obama look good. And of course, anything that makes Obama look better makes the Republicans look even worse. So the Republican’s only hope is if Obama’s plans for the economy fail. Rush Limbaugh said it himself.

The bottom line? I don’t think Obama is going to see any bipartisanship at all from Republicans for the next two years (until just before the midterm elections, when they need to be able to claim they were being bipartisan). Simply put, for Republicans to help Obama would be political suicide.

Does this mean that Obama should stop reaching out to Republicans, and should ignore their efforts to torpedo his programs? After all, if there is virtually no chance that Republicans will vote for your bills, why try to compromise with them? Ironically, I believe the answer is no.

What Obama did in his press conference was to reframe the issue (something he probably learned from the Republicans!). One of Obama’s main points is that if the Republican idea of bipartisanship is to insist that we continue the same financial policies that got us into the current economic mess, then that is not acceptable. By framing the issue this way and insisting that he will continue to reach out to them, he calls out Republican obstructionism and makes them look like the bad guys.

Is it working? According to a new Gallup Poll, 67% approve of the way Obama is handling the government’s efforts to pass an economic stimulus bill, while 58% disapprove of what the Republicans are doing on the bill. And a majority of Americans favor the idea of passing a stimulus plan of around $800 billion. As one blogger points out “If Obama is using bipartisanship as a political strategy, these numbers suggest it might be working.” 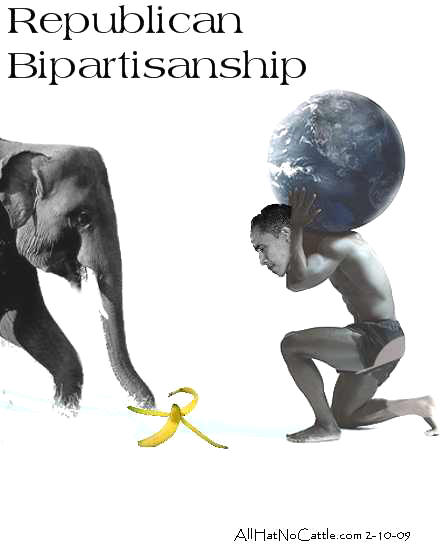 If you liked this, you might also like these related posts:
This was written by Iron Knee. Posted on Tuesday, February 10, 2009, at 3:13 pm. Filed under Irony. Tagged Economy, Obama. Bookmark the permalink. Follow comments here with the RSS feed. Both comments and trackbacks are currently closed.