When Context is Everything

We’ve had two very good examples recently of something that, when taken out of context, causes a vastly different reaction than if it is taken in context:

Example One: Is Obama just a guy?

Last week, a photograph flashed across the internet, which appears to show Obama checking something out: 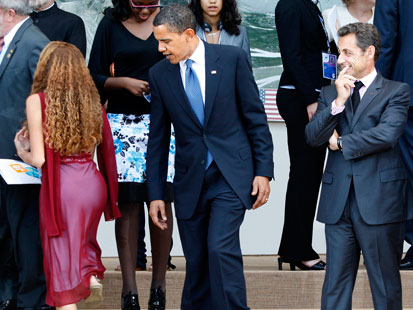 This photo is pretty funny; after all, few males can claim to be innocent of doing the same thing. Even French President Nicolas Sarkozy seems to be amused at Obama sneaking a look.

But just watch this short video of the same thing:

If Obama looked at the woman at all, it was very fleeting. However, Sarkozy doesn’t fare as well in the video. But this example is fairly innocent. After all, even if Obama did stare (which he didn’t) is it so horrible if he did?

This is a more serious example of something being taken out of context. Conservatives have attacked Sonia Sotomayor as a racist for her 2001 statement:

I would hope that a wise Latina woman with the richness of her experiences would more often than not reach a better conclusion than a white male who hasn’t lived that life.

Taken out of context, one could argue that this might be an offensive statement. Certainly, a reverse of this statement, said by a white male, would be offensive (“I would hope that a wise white male with the richness of his experiences would more often than not reach a better conclusion than a Latina woman who hasn’t lived that life.”) It also sounds like Sotomayor is saying that Latina women have richer experiences than white males.

Since this article is about context, here’s the context for that remark:

In our private conversations, Judge Cedarbaum has pointed out to me that seminal decisions in race and sex discrimination cases have come from Supreme Courts composed exclusively of white males. I agree that this is significant but I also choose to emphasize that the people who argued those cases before the Supreme Court which changed the legal landscape ultimately were largely people of color and women. I recall that Justice Thurgood Marshall, Judge Connie Baker Motley, the first black woman appointed to the federal bench, and others of the NAACP argued Brown v. Board of Education. Similarly, Justice Ginsburg, with other women attorneys, was instrumental in advocating and convincing the Court that equality of work required equality in terms and conditions of employment.

Whether born from experience or inherent physiological or cultural differences, a possibility I abhor less or discount less than my colleague Judge Cedarbaum, our gender and national origins may and will make a difference in our judging. Justice O’Connor has often been cited as saying that a wise old man and wise old woman will reach the same conclusion in deciding cases. I am not so sure Justice O’Connor is the author of that line since Professor Resnik attributes that line to Supreme Court Justice Coyle. I am also not so sure that I agree with the statement. First, as Professor Martha Minnow has noted, there can never be a universal definition of wise. Second, I would hope that a wise Latina woman with the richness of her experiences would more often than not reach a better conclusion than a white male who hasn’t lived that life.

Let us not forget that wise men like Oliver Wendell Holmes and Justice Cardozo voted on cases which upheld both sex and race discrimination in our society. Until 1972, no Supreme Court case ever upheld the claim of a woman in a gender discrimination case. I, like Professor Carter, believe that we should not be so myopic as to believe that others of different experiences or backgrounds are incapable of understanding the values and needs of people from a different group. Many are so capable. As Judge Cedarbaum pointed out to me, nine white men on the Supreme Court in the past have done so on many occasions and on many issues including Brown.

However, to understand takes time and effort, something that not all people are willing to give. For others, their experiences limit their ability to understand the experiences of others. Other simply do not care. Hence, one must accept the proposition that a difference there will be by the presence of women and people of color on the bench. Personal experiences affect the facts that judges choose to see.

This was written by Iron Knee. Posted on Tuesday, July 14, 2009, at 2:20 am. Filed under Irony. Tagged Obama, Supreme Court. Bookmark the permalink. Follow comments here with the RSS feed. Both comments and trackbacks are currently closed.