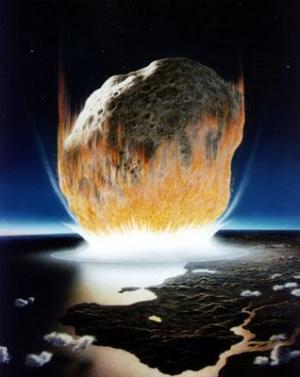 A while ago, we gave you ten ironic reasons to support health care reform, but now we (finally) can give you an ironic reason (albeit just one) to not be too concerned about global warming (we know you were desperately looking for a reason to ignore it).

A panel of 41 international experts has reviewed all the existing evidence on the massive Cretaceous-Teriary extinction, which killed off over two-thirds of the species on earth including the dinosaurs, and has concluded that it was caused by a 15km wide asteroid that slammed into the Yucatan peninsula 65 million years ago. The impact resulted in a crater whose walls were (briefly) as high as the Himalayas, and ejected so much material into the atmosphere that temperatures plunged, wiping out most of the life on earth in a matter of days. Clearly, a change in global climate can cause major problems to life on earth.

But there is a bright side to this story. The study concludes:

These terrifying events led to darkness and a global winter, resulting in the extinction of more than 70% of known species. The tiny shrew-like mammals which were around at that time proved better adapted to survival than the cumbersome dinosaurs, and the removal of these dominant animals paved the way for the radiation of the mammals and eventual emergence of humans on Earth.

So I guess that if we are too stupid and cumbersome to overcome global warming, we might just be paving the way for some other — smarter — species to become the new dominant animals.

This was written by Iron Knee. Posted on Friday, March 5, 2010, at 12:03 pm. Filed under Irony. Tagged Climate. Bookmark the permalink. Follow comments here with the RSS feed. Both comments and trackbacks are currently closed.