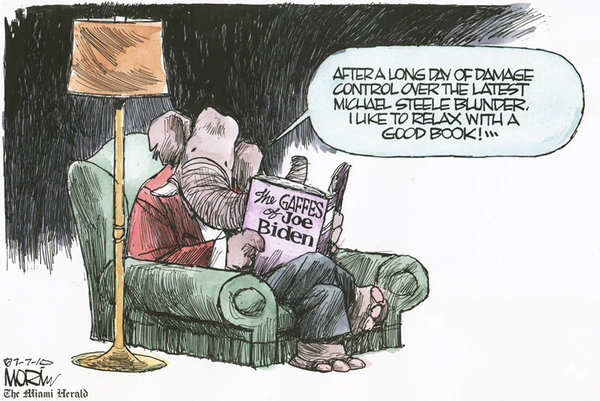 Well, it looks like Michael Steele might get to keep his job as RNC Chairman. Apparently, Republicans are afraid of a drawn-out fight over their most prominent African-American leader during the build-up to the November elections. Instead, they are going to try to marginalize him. After all, his term as chairman is up in six months.

One blessing coming from all this is that Steele’s tenure — starting right at the same time that Barack Obama became president — strongly demonstrates that politics is not about race. It is about competence. Obama and Steele may be the same race, but in terms of competence they are miles apart. Steele has been dogged by allegations of questionable spending, anemic fundraising, staff shake-ups, and worrisome gaffes. Obama has been dogged by questionable allegations, coming from the same people who appointed Steele their chairman.

This was written by Iron Knee. Posted on Wednesday, July 7, 2010, at 2:55 pm. Filed under Irony. Tagged Obama, Republicans, Steele. Bookmark the permalink. Follow comments here with the RSS feed. Both comments and trackbacks are currently closed.