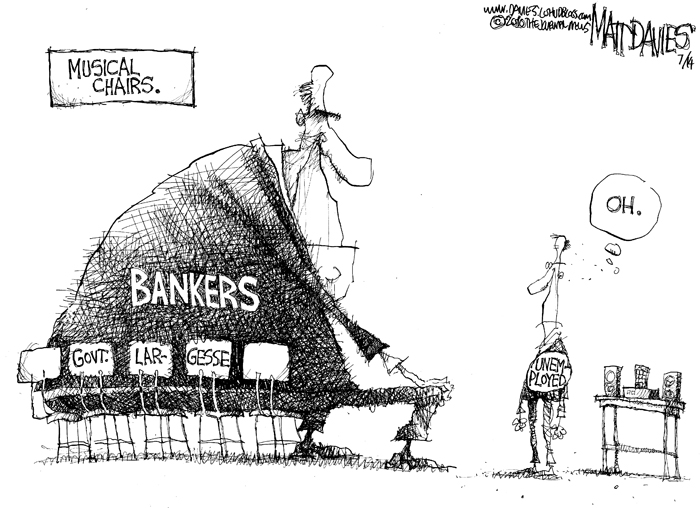 Billions of dollars to bail out the banks, but nothing for the unemployed who lost their jobs because of the financial crisis brought on by the banks. What makes this doubly ironic is that the Republicans claim that extending unemployment benefits would only encourage people without jobs to avoid looking for work. But by the same token, won’t bailing out the banks (and even worse, letting the bankers keep their million dollar bonuses) just encourage them to keep making the risky investments that caused the whole crisis in the first place?

And the irony doesn’t stop there. Since a bad economy tends to encourage votes against the party in power, Republicans will probably be rewarded for their filibusters against extending unemployment benefits, including getting more votes from the very unemployed people they are deliberately hurting.

If you liked this, you might also like these related posts:
This was written by Iron Knee. Posted on Thursday, July 15, 2010, at 8:32 am. Filed under Hypocrisy. Tagged Economy, Republicans, Unemployment. Bookmark the permalink. Follow comments here with the RSS feed. Both comments and trackbacks are currently closed.