America Speaking Out: the GOP Not Listening

The Pledge to America was supposed to be based on the GOP’s much ballyhooed “GOP Listening Tour”, including their (taxpayer funded) “America Speaking Out” website where visitors submitted ideas that were voted up or down by others. But as Tiny Dupuy points out in “The Moderates’ Lament“, the most popular (by vote) ideas on the America Speaking Out website are decidedly centrist. For example: abolishing Don’t Ask, Don’t Tell; denouncing Palin, Beck, and Limbaugh; not kowtowing to the NRA; and even getting some distance from the Religious Right. Even on hot button issues like abortion, the idea with the most votes was to make abortion “safe, legal, and rare”. There were even plenty calls to legalize marijuana! And, as she points out, these are all ideas from self-identified Republicans.

So, did any of these ideas make it into the Republican’s new “Pledge to America”? You must be joking. As Jon Stewart demonstrates so well, the ideas in the pledge are word-for-word the same ideas from the Contract from America from the Clinton era.

So, why are we hearing the same old ideas over and over? Didn’t they get to keep any of these promises during the Bush years, when they had complete control of the government? I think you know the answer to that.

The problem is that the Republican party is incapable of even acknowleding new ideas. As Dupuy puts it “The current Republican Party is counting on the Tea Party’s morphing into the attack wing of the GOP – isolating moderates and anyone with genuine new ideas.” 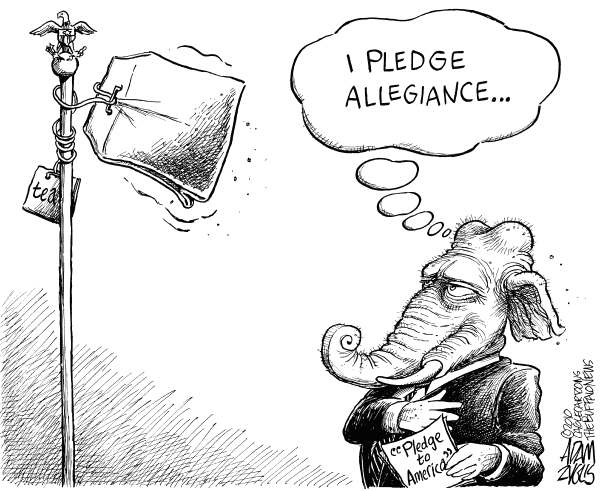 This was written by Iron Knee. Posted on Wednesday, September 29, 2010, at 5:33 am. Filed under Hypocrisy. Bookmark the permalink. Follow comments here with the RSS feed. Both comments and trackbacks are currently closed.