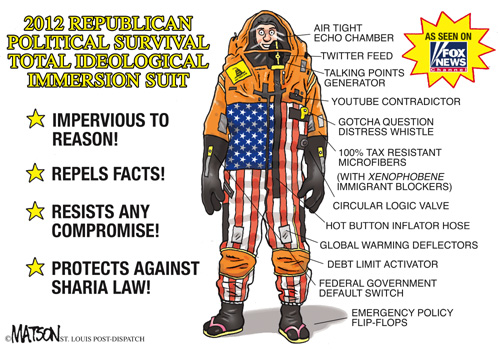 I think clearly what this demonstrates is that the president of the United States is afraid of my candidacy. He fears me.

Speaking of Fox News, Bachmann also claimed that Fox anchor Chris Wallace called her to personally apologize for asking her in an interview on Sunday if she was a “flake”.

UPDATE: Someone has been updating Wikipedia to make it reflect reality according to Bachmann. This would be hilarious if it weren’t so frightening. For example, Bachmann gave a speech in Waterloo, Iowa and said she was proud to be in the town where John Wayne was from, but John Wayne was actually from Winterset, Iowa (several hundred miles away), although serial killer John Wayne Gacy was. Soon after, someone edited the Wikipedia page for John Wayne and changed his birthplace from Winterset to Waterloo.

Bachmann also claimed that John Quincy Adams was one of the “founding fathers” of our country (even though he was a mere child when his father signed the Declaration of Independence). But sure enough, Wikipedia was edited so that John Quincy was named as a founding father. The edits aren’t limited to Bachmann. When Sarah Palin mangled the telling of the ride of Paul Revere, a series of edits were made to Wikipedia in an attempt to support her fictional version.

This was written by Iron Knee. Posted on Tuesday, June 28, 2011, at 11:16 am. Filed under Humor. Tagged Republicans. Bookmark the permalink. Follow comments here with the RSS feed. Both comments and trackbacks are currently closed.