The media is suddenly all atwitter about how our patent system is out of control. Some of this is (deservedly) brought on by the ridiculous patent wars currently going on between Apple, Microsoft, Samsung, HTC and others. Or by the increasing number of “patent trolls” — companies that don’t actually build much of anything but instead make their money the old fashioned way: by suing companies that violate the patents they hold. 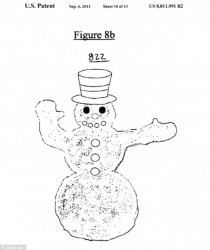 But none of that is what got the media frosted. Instead, it was the granting earlier this month of a US patent for a technique for building a snowman (or woman, the patent notes) to inventor Ignacio Marc Asperas, of New York. You can read the patent yourself, and it is highly amusing.

But as usual, the media got it terribly wrong. This is not a patent for creating arbitrary snowmen, it is for a new and novel device (involving hollow spheres containing static electricity generators) to enable kids (and kids at heart) to build the snowman (or woman) of their dreams without breaking their backs lifting heavy snow boulders into position (the hollow spheres greatly reduce the weight). This is invention at its best — increasing joy while at the same time preserving the health of our youth! In these troubling economic times, it also increases jobs for lawyers, who will have to be employed to check snowmen (and women) make sure that nobody uses this new technique without the proper license.

Why is the media picking on poor Mr. Asperas? A quick search shows that there are at least a dozen patents (and numerous trademarks) already existing that relate to snowmen (and occasionally women).

This was written by Iron Knee. Posted on Tuesday, September 27, 2011, at 10:43 am. Filed under Irony. Tagged Patents. Bookmark the permalink. Follow comments here with the RSS feed. Both comments and trackbacks are currently closed.