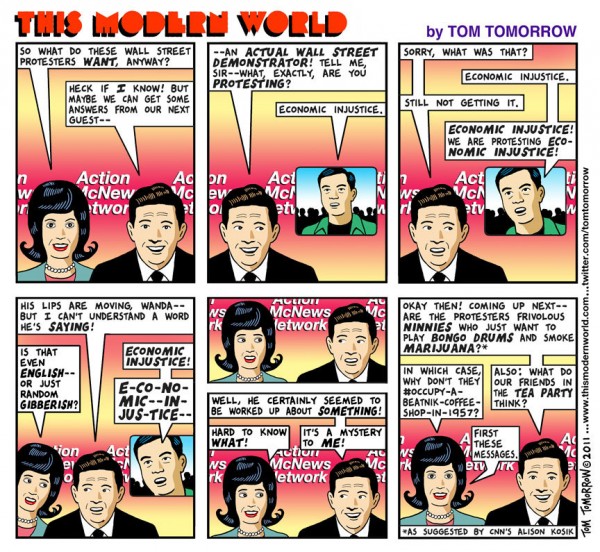 The media seems to be slowly waking up to the fact that they can’t just ignore the Wall Street Protestors. So they are making fun of them or insulting them instead.

Ironically, many of the criticisms of the protests are the same ones that were leveled against the Tea Party movement, but they are now coming from the tea partiers! For example, from Judson Phillips of Tea Party Nation:

While the left wants to tear down and destroy all that is good in America, and replace it with an ideology if [sic] evil, the Tea Party movement is based on love. Real Americans love their country and their neighbors. The Tea Party is not motivated by hatred as the left is.

I guess he forgot the threats made against Congresspersons, the racial slurs and insults, and the demonstrators who brought guns to political rallies.

UPDATE: A good article on the “willful deafness” of the media to OWS.

This was written by Iron Knee. Posted on Thursday, October 13, 2011, at 12:21 am. Filed under Irony. Tagged Protests. Bookmark the permalink. Follow comments here with the RSS feed. Both comments and trackbacks are currently closed.