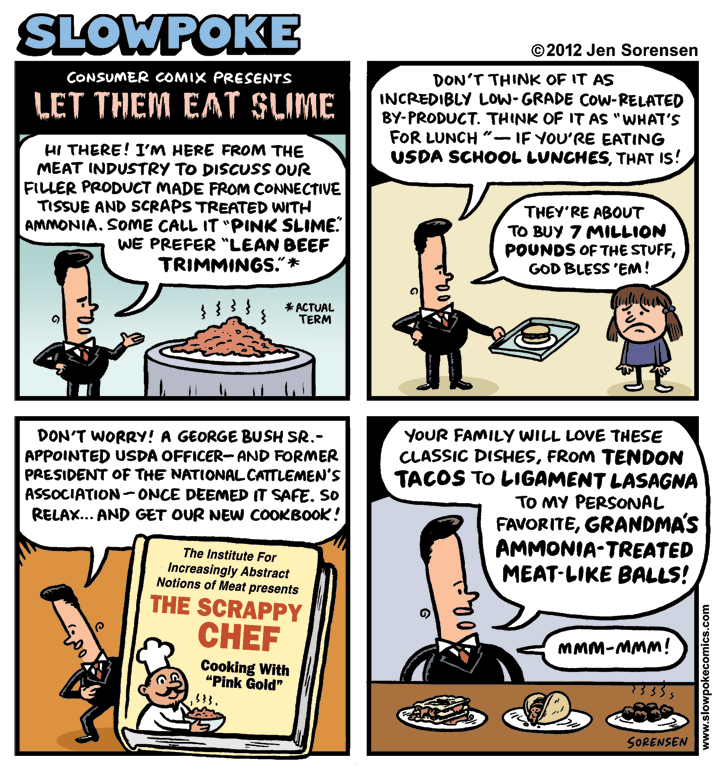 I spent way too much time last weekend reading about pink slime. I really wanted to get to the bottom of the slimebucket, if you will. This particular controversy has been burbling (and oozing and gurgling) ever since celebrity chef Jamie Oliver did a segment trashing the stuff last year (it’s a little melodramatic, but the basic sentiment is sound). McDonald’s, Taco Bell, and Burger King proceeded to drop it from their beef. More recently, a couple microbiologists condemned the goop as nutritionally-deficient, woefully-unlabeled Not Meat.

Now, I’ve traveled enough and watched enough cable-network food shows to know that gross-seeming animal parts are edible, and possibly even a delicacy, depending on the palate of the beholder. So I wanted to mentally separate the unappetizing aspect of pink slime from the food safety/nutrition issues. Here’s what I’ve discerned:

There’s a case to be made that ammoniated meat is safer because pathogens are reduced. But at the high levels of ammonia that may be required to effectively kill bacteria, the meat starts to reek of ammonia. The Times has a lengthy report on the iffy history of this particular technology. This Prevention article also raises some good questions about what we don’t know.

Personally, I don’t want to be a human guinea pig for ammonia ingestion. It seems intuitive that schoolkids shouldn’t be, either. The fact that they have to use ammonia in the first place is a symptom of the larger problem of industrial meat production. That these scraps are teeming with deadly bacteria in the first place is a result of the appalling conditions in feedlots (or CAFOs). The meat industry, in defense of pink slime, laughably touts the “sustainability” of using all parts of the cow, as though these people give one whit about environmentally-friendly farming practices. And then there’s the fact that the stuff is just low-quality, non-nutritious crap, the logical endpoint of a system built on layers and layers of crap. Is this really the best we can do for our kids?

This was written by Iron Knee. Posted on Friday, March 16, 2012, at 10:32 am. Filed under Irony. Tagged Corporations, Food. Bookmark the permalink. Follow comments here with the RSS feed. Both comments and trackbacks are currently closed.