The Messenger Shooting Himself in the Foot 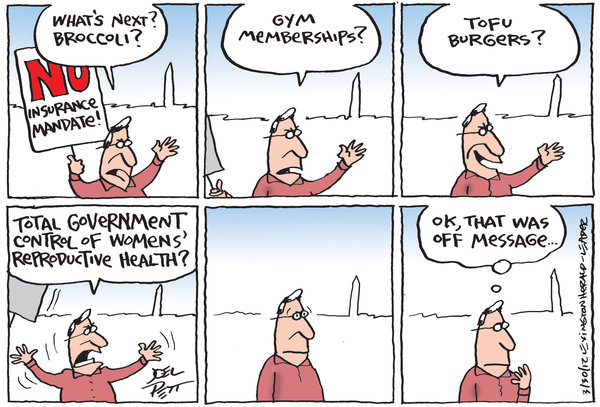 Yes, Supreme Court Justice Antonin Scalia really did say that if the government can force you to buy health insurance, then it could force you to buy broccoli. Steven Pearlstein easily tears this argument to shreds:

Another of Scalia and Alito’s cute debating tricks was to latch on to an opposing argument and take it to its illogical extreme in order to show how silly it is. By this technique, the individual mandate suddenly became the first step on the proverbial slippery slope to government requiring that all Americans buy broccoli or a gym membership because those, too, will make us all healthier and thereby lower health-care costs.

But for some reason, when it comes to requiring Americans either to buy health insurance or pay a fee, we are now supposed to believe that “all bets are off,” according to Chief Justice John Roberts, or that “a fundamental shift” has occurred in the relationship between the individual and government, according to Justice Anthony Kennedy.

For starters, the Constitution already limits the “abuse” of such power by subjecting those who wield it to regular elections in which citizens are free to decide what is going too far and what is not.

This was written by Iron Knee. Posted on Tuesday, April 3, 2012, at 12:33 am. Filed under Hypocrisy. Tagged Health. Bookmark the permalink. Follow comments here with the RSS feed. Both comments and trackbacks are currently closed.