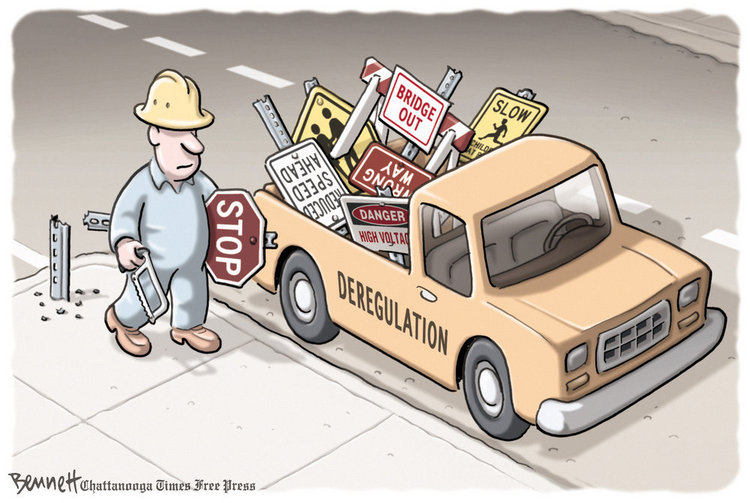 I find this comic extremely ironic. It compares deregulation to someone removing traffic signs. When you look at it, your reaction is probably “OMG, deregulation is bad!”. Anarchy and chaos would result! Injury, death, and mayhem in the streets!

The irony is that an increasing number of cities in Europe are doing exactly that — removing all traffic signs. Some are even removing road markings. So far, the result has been that motorists are forced to become more careful, reducing accidents and other problems. Even more ironically, traffic congestion is often lowered.

As a result, the food scene went from boring to bountiful. A major travel magazine rated us one of the top places in the world for street food. Food at conventional sit-down restaurants has gotten much better as well. Why? When regulations make it more expensive to start and operate a restaurant, you tend to be much more cautious and serve foods you know will sell. But with a lower barrier to entry, you can try more adventurous menus. Some of these innovative restaurants will fail because their food doesn’t catch on. But at least they will fail quickly and waste less money failing, so their owners can try again. In just a few short years, we went from a monotonous food scene to one where I can get just about any kind of crazy delicious food from anywhere in the world. That’s deregulation that makes sense!

This was written by Iron Knee. Posted on Monday, May 21, 2012, at 12:40 am. Filed under Irony. Tagged Regulations. Bookmark the permalink. Follow comments here with the RSS feed. Both comments and trackbacks are currently closed.