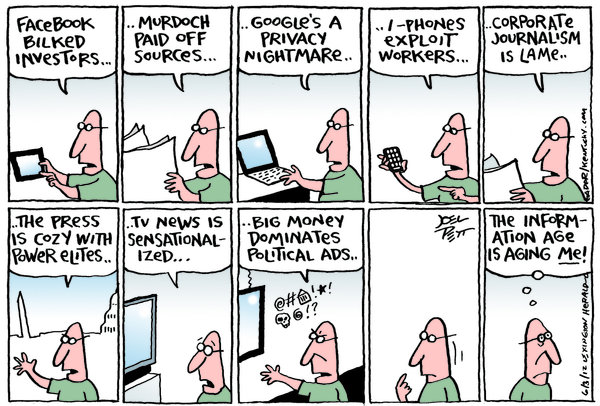 This is a question that has been bugging me for some time. I love the Internet, I make my living from it, and even if I didn’t I couldn’t imagine living without it now. But at the same time, I wonder if on balance, has the Internet has been a good thing for our democracy?

You would think that the free flow of information, including removing the government and corporate gatekeepers to information, would be nothing but good. But instead we suffer from information overload, and there are so many choices of information it is difficult to separate the good information from the lies and propaganda. With so many choices, people seem to mainly view information that reinforces their existing beliefs, leading to further polarization. I suspect that it was no coincidence that the rise in partisanship in Washington was simultaneous with the widespread adoption of the Internet.

Even worse, I have no idea what could possibly be done to solve this problem.

This was written by Iron Knee. Posted on Sunday, June 3, 2012, at 7:44 am. Filed under Irony. Tagged Media. Bookmark the permalink. Follow comments here with the RSS feed. Both comments and trackbacks are currently closed.