One of my favorite sites, electoral-vote.com has a good history of Health Care reform in the US, which they printed before the Supreme Court decision was announced. Here’s an extended quote:

President Harry Truman tried and failed in 1945. President Lyndon Johnson, the master of the Senate, twisted enough arms and other body parts to get Medicare through Congress in 1965. While it didn’t provide universal health care, it did provide care for seniors. Johnson, the consummate politician, apparently thought this was the best he could do.

The next major attempt was from President Richard Nixon, who issued a proposal in 1974. The core of the proposal was an employer mandate, requiring nearly all businesses to offer health insurance to their employees. He didn’t get it passed.

In 1989, the very conservative Heritage Foundation took up the problem and looked for a conservative solution. What they came up with was a plan to have everyone covered by making them buy insurance from a private insurance company. It was obvious to them that this was constitutional since big insurance companies all engage in interstate commerce. This plan had the huge advantage from their point of view that it left the entire health care system in the private sector, with no government involvement. It also meant big profits for the insurance companies. What else could you ask for? Sen. Don Nickles (R-OK), a very conservative senator, introduced a bill with the Heritage Foundation plan in 1993. It didn’t pass.

In 2006, then-governor Mitt Romney of Massachusetts advocated passing a modified version of the Heritage Foundation plan in Massachusetts. The state legislature tweaked it a bit, but it passed in 2006.

In 2009, President Obama thought the easiest way to get the Republicans to support a health-care plan was to use theirs, so he proposed Romney’s plan on a national scale. By doing this, he demonstrated that he was no Lyndon Johnson. The Republicans closed ranks to oppose their own plan, just to avoid giving Obama a big victory. None of the opposition at the time had anything to do with its constitutionality. Even the most conservative legal scholars agreed with the Heritage Foundation that regulating the massive insurance industry fell under the interstate commerce clause. Only after the bill passed and Republicans began looking for a way to get rid of it, did the constitutionality come up as a possible angle.

One of the reasons that conservative legal scholars didn’t think a case could be made on constitutional grounds is the 2005 Gonzales v. Raich case. In this case, the Court ruled that Angel Raich’s growing medicinal marijuana for his own personal use under his doctor’s instructions constituted interstate commerce and Congress had the power to overrule the California law allowing cultivation of marijuana for personal medical use. At the time of the decision, many legal scholars were surprised at the concept that growing your own (legal) marijuana with no intention of selling it at all, let alone interstate, somehow constituted interstate commerce. But that is how the court ruled. This led most Court observers to believe that the Court had a very expansive definition of interstate commerce and if growing your own marijuana was interstate commerce, then certainly something that affected 18% of GDP was going to be interstate commerce. We will find out if that is true later today. If the Court rules against the ACA, it will especially interesting to see how the majority reconciles the decision with Gonzales v. Raich..

In summary, the Republican opposition to ObamaCare (a.k.a. RomneyCare a.k.a HeritageCare) is purely political since it was their plan to start with. If a Republican senator had introduced it during either Bush administration it would have sailed through Congress with a huge bipartisan majorities. After all, 40% of the Republican senators voted for Medicare, which is essentially socialized insurance and goes much further than ObamaCare. 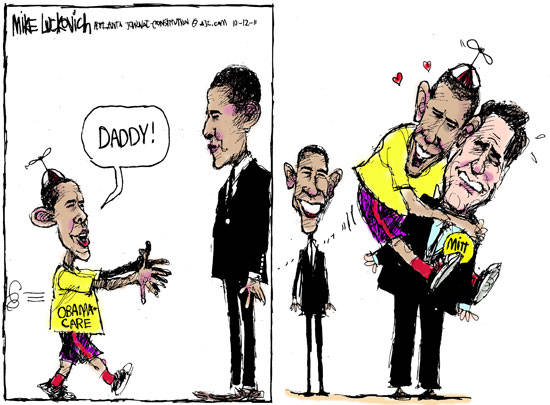 This was written by Iron Knee. Posted on Friday, June 29, 2012, at 12:01 am. Filed under Irony. Tagged Health. Bookmark the permalink. Follow comments here with the RSS feed. Both comments and trackbacks are currently closed.