None of the Above?

Stephen Colbert brilliantly notices that there is a better alternative to Republican party candidate Mitt Romney, at least in one state:

You know, after two years and billions of dollars, our presidential election is going to come down to a few undecided voters in key swing states. The fate of our country is now in the hands of the people who don’t think about what they want until they get right up to the register at McDonalds.

And one of those key swing states is Nevada where, since 1978, their presidential election ballot gives voters the option to choose ‘none of the above’. But now folks, the Nevada Republican Party has gone to court to have ‘none of the above’ taken off the ballot because, as the National Journal put it, “In Nevada, ‘none’ is a fearsome foe for the GOP”.

That’s right; Nevada Republicans are scared that none of the above could take votes from Mitt Romney. And folks, I tell ya, I think they’ve got grounds here. Remember, Mitt’s not telling us how he’s going to fix the economy, or what tax-loopholes he’s going to close or what his immigration policy is going to be. The whole message of his campaign is ‘I’m not Barack Obama’ and you can’t get more ‘Not Barack Obama’ than no-one.
“And folks, this guy, this guy right here, he’s got the conservative credentials that Romney lacks. I mean, you wanna talk small government this guy believes in ‘none’ government. And here’s what I think Romney’s gotta do: ‘none of the above’ is so appealing to Republican voters I believe Mitt Romney has gotta choose him as his running mate. I mean, look at who he is considering now: Portman, Pawlenty and Jindal? They wish they had the charisma of ‘none of the above’.

Although of course I can’t say for sure that ‘none of the above’ would even accept the VP slot because despite repeated calls he has not made himself available to the press, which kinda makes you wonder if there’s nothing he’s not hiding.

Conservatives don’t like Romney because he is a liberal (at least he was while governor of Mass., when he believed in gay rights, access to abortion, healthcare for all, and relaxed immigration).

Liberals don’t like Romney because he is a conservative.

The Religious Right doesn’t like Romney because they think he isn’t a Christian.

Independents don’t like Romney because he doesn’t seem to stand for anything (at least not for more than a few minutes) other than that he isn’t Obama.

And the media (and even some Republicans) don’t like Romney because he won’t release his tax returns.

The only people who seem to like Romney are the ultra-rich, and perhaps some Mormons who don’t mind his lying. Will that be enough to get him elected? 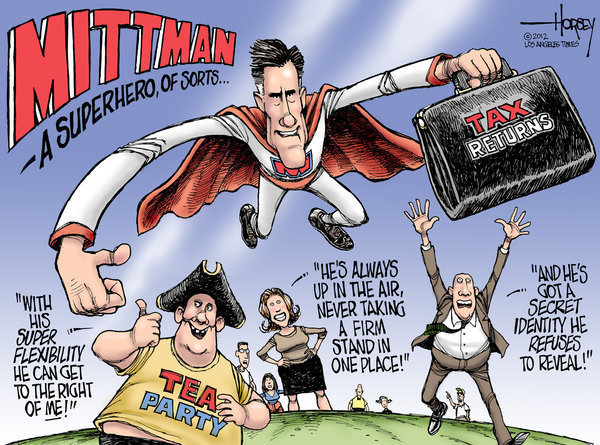 This was written by Iron Knee. Posted on Monday, July 23, 2012, at 12:39 am. Filed under Humor. Tagged Elections. Bookmark the permalink. Follow comments here with the RSS feed. Both comments and trackbacks are currently closed.