PolitiFact is widely acknowledged as non-partisan, and to many people even a bit conservative. Even so, it should come as a surprise to nobody that their truthfulness ratings for the presidential candidates are pretty dramatically skewed: 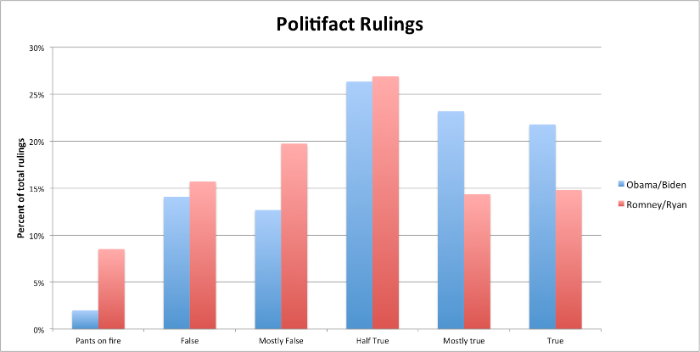 That’s right, the Republicans lead in “Pants on Fire” lies, False, and Mostly False, while the Democrats lead in Mostly True and True. Half True statements are a tossup. Here’s the raw data:

Mitt Romney all by himself accounts for 58% of the “Pants on Fire” lies. Does anyone really want a president who lies so much?

This was written by Iron Knee. Posted on Sunday, October 21, 2012, at 11:29 am. Filed under Irony. Tagged Elections. Bookmark the permalink. Follow comments here with the RSS feed. Both comments and trackbacks are currently closed.