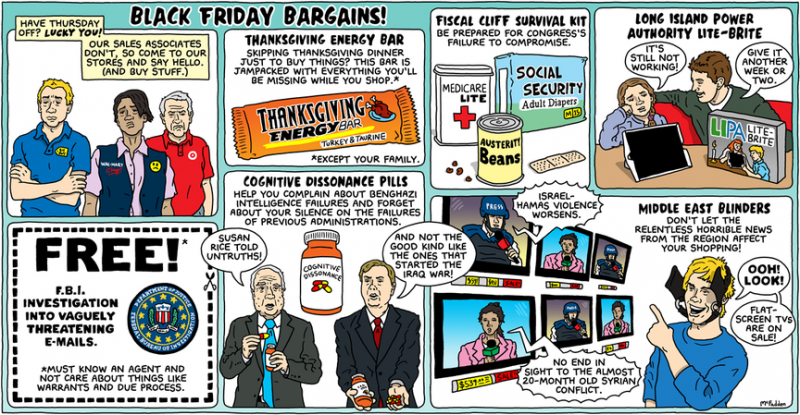 For your Thanksgiving-dinner-with-your-relatives enjoyment, MSNBC has a list of handy retorts to use when your Fox-News-listening uncle Gary starts spouting off his latest talking points. My favorite is number 5:

When He Says: “Obama promised to be post-partisan, but he’s completely unwilling to work with Republicans.”

You Say: “Obama spent all of 2009 and much of 2010 trying to compromise with Republicans on the stimulus, health-care reform, deficit reduction, and financial reform. Meanwhile, even before Obama took office, the GOP held a meeting where they agreed on a strategy of knee-jerk opposition as a way to beat Obama in 2012. “If he was for it, we had to be against it,” as one participant explained it. Wanna blame someone for the lack of bipartisanship? Look at your own party.”

This was written by Iron Knee. Posted on Thursday, November 22, 2012, at 12:29 am. Filed under Humor. Bookmark the permalink. Follow comments here with the RSS feed. Both comments and trackbacks are currently closed.