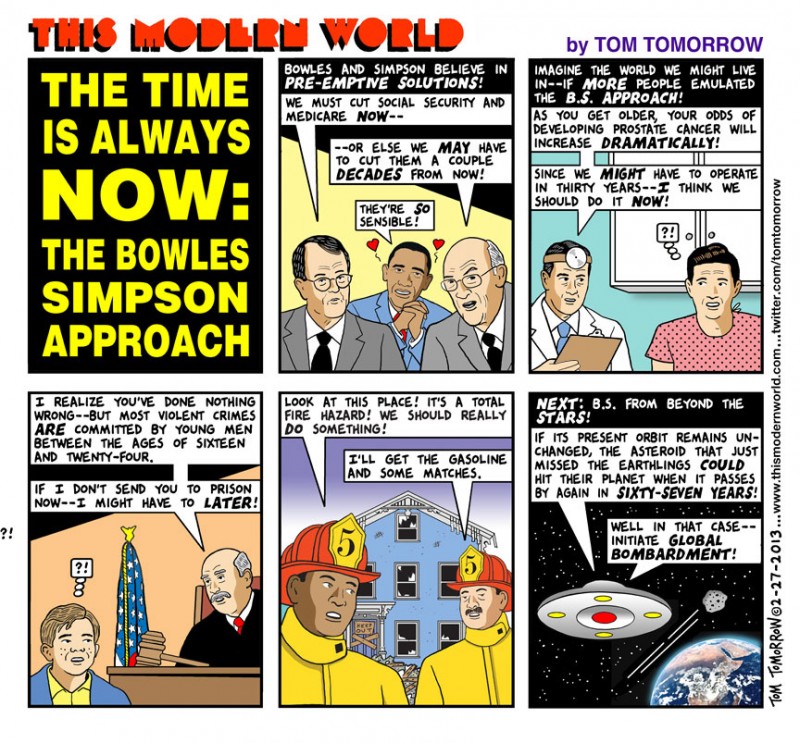 Somehow, conservatives have hoodwinked us into believing that there is some sort of financial emergency, and that in order to avoid cutting entitlements in the future, we have to… cut them now! This is nonsense.

An excellent article in The New Yorker that explains the real situation, and gives a strong hint as to why conservatives are pushing this con:

Projections show that, owing to an aging population and rising health-care costs, the Medicare Trust Fund will become insolvent in 2024 and Social Security in 2033. The image of empty coffers is a powerful one: half of all Americans aged between eighteen and twenty-nine don’t think that Social Security will exist when they retire. That’s a bizarre thing to believe about an important government program. No one ever says, “I don’t think the U.S. Army will be there when I get old” or talks about the Defense Department “going broke.” We assume that there will always be a need for the military, and that we’ll end up paying the taxes that are necessary to fund it. But, because Social Security and Medicare have always been self-supporting, it’s easy to believe that they’ll just vanish if the trust funds dry up. This isn’t the case. Relatively minor tweaks to Social Security will allow it to keep paying full benefits for many decades. And, if we wanted, we could supplement funding for both programs with general government revenue. That’s what most European countries do, and, indeed, parts of Medicare are already paid for out of general revenue. The only way that Social Security and Medicare can go “bankrupt” is if we let them.

So why are politicians obsessed with the question of solvency? Because it makes cutting entitlements seem inevitable, rather than a political choice. After all, if you’re in favor of cutting entitlements, that means you’re in favor of spending less money taking care of old people. That’s a tenable position, but it’s politically dicey—particularly for Republicans, since the elderly are among their biggest supporters. It’s far more palatable to argue that we simply have to cut benefits, because otherwise the programs will go bankrupt. That’s why when, in 2011, Paul Ryan introduced a plan to effectively replace Medicare with a voucher system he said that he was doing so in order to preserve Medicare for future generations. Hand-wringing about Medicare and Social Security going bust allows Republicans, paradoxically, to portray themselves not as opponents of entitlement spending but, rather, as its saviors.

So we get proposals to raise the eligibility age of Medicare, but that’s a false savings. Because Medicare is better at controlling medical spending than private insurance, raising the retirement age could cost almost twice as much in increased medical costs as it saves in government spending. So what they are really proposing is to lower government spending by a dollar by raising your health insurance costs by two dollars. And the lower government spending will only save you money if they cut taxes (instead of, say, throwing it at the military), and even then most of that tax cut will undoubtably go to the rich.

Only an obsession with the trust fund makes kicking people off Medicare seem like a rational approach to our health-care problems.

We should be expanding Medicare, not kicking people off of it! It is ironic that some of the same people who hoped Obamacare would be a single-payer system have accepted the con that we have to control Medicare costs by cutting benefits. Instead, we should be controlling Medicare costs by controlling medical costs. And a really good way to control medical costs is to expand Medicare. 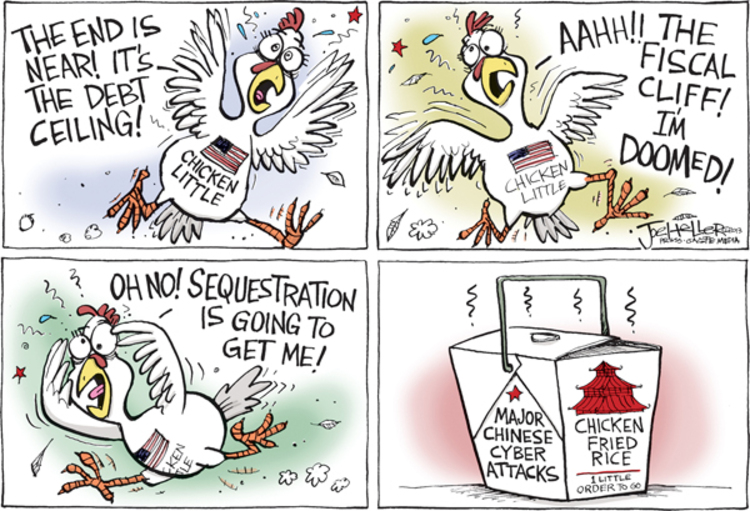 This was written by Iron Knee. Posted on Monday, February 25, 2013, at 10:44 am. Filed under Irony. Tagged Health. Bookmark the permalink. Follow comments here with the RSS feed. Both comments and trackbacks are currently closed.