The Irony of Democracy

I have to admit, I’m not really sure what to think about what is going on in Egypt right now. Some of you may remember that I visited Egypt less than two years ago, just after the revolution but before the elections. But if I learned one thing from talking to people there, it is that what gets reported in the US media about Egypt has very little to do with what’s actually going on there.

A little over a year ago, Egypt was one of the prime movers of the “Arab Spring”. A popular, and relatively blood-less uprising deposed dictator-for-life Hosni Mubarak. As it has done in the past, the military took over, but the popular uprising continued, insisting that the country should become a democracy and hold elections.

And so they did. But a curious thing happened on the way to the ballot box. The political party of the Muslim Brotherhood won, controlling both the parliament and electing president Mohammed Morsi. Now, a year later, after more massive protests, the Army has stepped in and removed Morsi from office.

Now here is where it gets ironic. The same people who insisted that Egypt hold democratic elections are now celebrating that Morsi was removed from office by the military. They claim that once elected, the Muslim brotherhood spent most of their time entrenching themselves and consolidating power, rather than trying to fix the problems Egypt was facing. About the only thing that is clear is that the Egyptian economy got worse after the election, instead of better like everyone expected.

You might think that the US would have been worried by having Islamists in power in Egypt. After all, Egypt is the only Arab nation that has a peace treaty with Israel, one of our closest allies, and the Islamists have threatened to throw that treaty away. But ironically, the Egyptians are mad at the US government for supporting the democratically elected president of Egypt, and are accusing Obama and Secretary of State Clinton of meddling to keep Morsi in power.

It just doesn’t add up. Either everything has gone bizarre in Egypt, or there is something going on that our news media isn’t telling us. 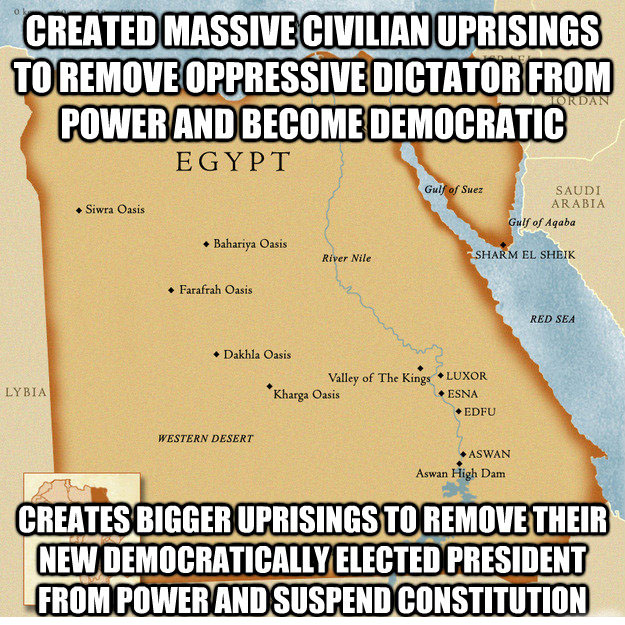 This was written by Iron Knee. Posted on Thursday, July 4, 2013, at 1:47 am. Filed under Irony. Tagged Democracy. Bookmark the permalink. Follow comments here with the RSS feed. Both comments and trackbacks are currently closed.