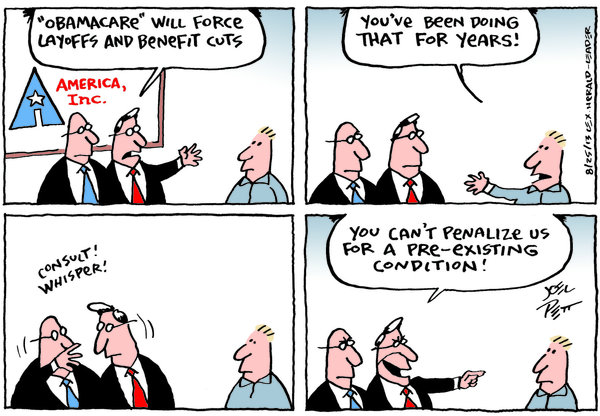 I’ve been wondering when someone would point out the utter ludicrousness of right wingers claiming that Obamacare was going to force businesses to lay off employees and cut benefits. Like, did they think we wouldn’t notice that they’ve been doing that for years without Obamacare?

Not to mention that just threatening to not raise the debt ceiling probably will cost far more jobs than Obamacare, while actually following through on their stupid threat will cost even more jobs. Why would we ever believe they care about jobs?

UPDATE: Actually, there is no evidence that Obamacare is causing an increase in part-time jobs at the expense of full-time jobs. In fact, the number of “involuntary” part-time jobs is falling. Apparently, this is another propaganda myth cooked up by anti-Obamacare forces (cough, Karl Rove and Fox News).

This was written by Iron Knee. Posted on Wednesday, August 28, 2013, at 12:46 am. Filed under Hypocrisy. Tagged Health, Unemployment. Bookmark the permalink. Follow comments here with the RSS feed. Both comments and trackbacks are currently closed.