Biting the Hand that Feeds You

So a question I’ve been asking myself is why did the Republicans fold on both the shutdown and the debt limit, without getting anything in return?

I think the answer, as usual, has to do with following the money. Campaign contributions to Tea Party members of the House of Representatives dropped significantly because of the shutdown. This happened mainly because corporations realized that the radical Republicans who forced the government to shut down are bad for business. Some business trade groups have even announced that they are looking at backing primary challengers to Tea Party incumbents.

Retailers are worried about the impact that repeated budget confrontations are having on consumer confidence going into the holiday retail season.

What’s truly ironic about this is that the business side of the Republican party has now turned against the Tea Party candidates that they helped elect. Amazingly enough, even the US Chamber of Commerce — which was a huge donor to Tea Party candidates — has announced that they need to “elect people who understand the free market and not silliness“. The fact that they caused this silliness seems lost on them. 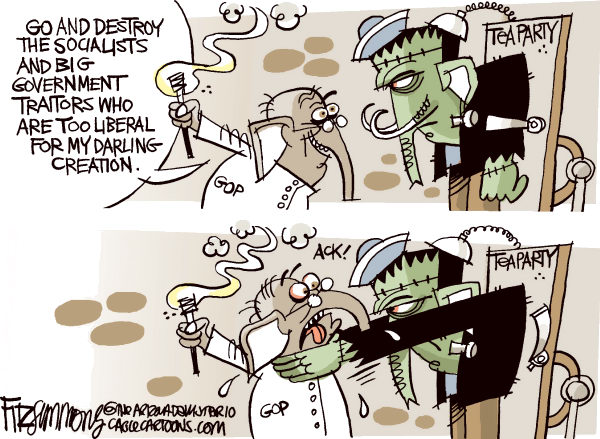 Perhaps losing their source of funding will be the only thing that kills off the Tea Party cancer that is trying to destroy this nation.

UPDATE: The Chamber of Commerce CEO takes Ted Cruz to task, saying “Well I don’t know Sen. Cruz. I think of him as a tennis player. You know, if you’re going to rush the net all the time you better have a lot of motion to the left and the right. And he hasn’t proven that to me yet.” And when a reporter suggested that the business community wants Cruz to “sit down and shut up” he responded “Well that might be one thing we could work on.”

This was written by Iron Knee. Posted on Monday, October 21, 2013, at 1:01 am. Filed under Irony. Tagged Republicans, Shutdown, Tea Party. Bookmark the permalink. Follow comments here with the RSS feed. Both comments and trackbacks are currently closed.